Rightly or wrongly, I viewed Gozu for many years as a Takashi Miike film that I had to mark off my watchlist. I don't know where the notion first came from, but I viewed this as one of his top titles, and one that I should have seen during his initial wave of popularity. It's not one of his top titles, not by a long shot, but it does have enough bizarre moments in it to make it something I can imagine fans of his work recommending to others.

It all starts with Ozaki (Show Aikawa) going a bit crazy. He's a yakuza gangster, which is not the kind of person you want going a bit crazy, and a crime boss orders Ozaki's friend, Minami (Hideki Sone), to kill him. This sets Minami off on a journey that includes a number of eccentric characters, with one of them being a woman (Kimika Yoshino) claiming to be someone that defies possibility.

There's plenty here to mark this out as decidedly Miike, from the excessive lactation reminiscent of Visitor Q to a typically bonkers finale. Teaming up once again with writer Sakichi Sato (who also wrote Ichi The Killer, as well as both the live-action and animated prequels) could have yielded some great results, but the result this time around is a mixture of dull moments and, well, more dull moments that are dressed up in bizarre clothing. It doesn't matter how many cow-headed men you squeeze into your movie if you don't do anything interesting with them. The same goes for any of the other strange characters in this movie, who all seem to have their quirks simply for the sake of having quirks. There are people that can make that work (David Lynch being the most obvious), there are movies in which those threads add to a fine patchwork, but Miike and Sato don't manage it here.

Sone does well in his role, carrying most of the movie on his shoulders as he has to react to a growing selection of oddities. He's not as fiery or over the top as many other protagonists in Miike movies, which works well in contrast to the journey he ends up going on. Keiko Tomita makes a strong impression as the Innkeeper, a woman who at least keeps things interesting whenever she's onscreen, because of how she acts around Sone, almost defying him to view things he is uncomfortable with until he sees what events seem to be conspiring to tell him. Yoshino feels strangely like someone who was hired to be in the film and then left to wait while everyone else got their script pages. She's not necessarily bad in her role, although it's hard to tell, but she never seems truly engaged with the people around her. This may have been a very deliberate decision, for reasons that will be obvious to those who have seen the movie, but it's not good that the character who is an essential third within the plotting of the film so often feels as if they're not present.

Overall, I'd have to say that this is one of the most disappointing Miike movies I have seen. But it's still not a BAD movie. I know a few others who like this more than I do, and there were one or two scenes here that still had me glad I watched the thing. Those who know the filmography of Miike already know that his more prolific periods are not matched by a consistency in quality. You get some low points, but the highs are more than worth it.

There's a disc here.
Americans may want to check this one out here. 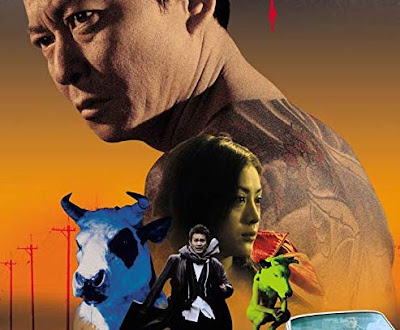