Although I rarely do this, I decided to seek out some other reviews of Vampire Clay once the movie had finished. There were two reasons for that. First, I was looking at a variety of sources to double-check some of the information about the cast. Second, I wanted to know what others thought of it, knowing already that I would be recommending it to others. I ended up dissatisfied with what I found. There's very little specific information out there, perhaps due to the nature of the film itself, and opinions vary wildly between those who appreciated the humour of the film and those who don't think of it as a horror comedy.

As far as I'm concerned, it's definitely a horror comedy. The central idea makes that a given, and the more inventive moments brilliantly mix gore gags with surreal humour. So trying to claim that it isn't one is either showing that you missed the intent completely, or that it really didn't work for your comedic taste.

Let me get to a brief description of the plot anyway, and it IS brief. A bunch of people at a tiny art school start to be attacked, consumed even, by some sentient clay that has the power to zombiefy people, warp their body, and use them to attack others. Is there any way to destroy it? Maybe. Or maybe that will have to wait until the inevitable sequel which I am prematurely going to name A Time To Kiln. There IS actually a Vampire Clay 2 already, I was unaware of that, but I have no idea how connected it is to this tale, or when we may get a chance to see it here in the UK.

Written and directed by Sôichi Umezawa, making his feature directorial debut, this is a film that turns the small budget and limited resources into a positive, thanks to the wonderful stop-motion work that often shows the living clay on the attack. Gorehounds may be a bit disappointed, but there's just enough bloodshed and nastiness to ensure that this isn't a complete cop out when it comes to the clay-based carnage.

The script is simple, the characters are paper-thin (I won't even namecheck the cast, all do decent work though), but none of that matters when the visuals start to become energised, staying that way right through to the very end. You get a backstory to the main creature(s), but it hardly matters. What matters is knowing that you're always just one minute away from something inventive and impressive, considering the obvious limitations on Umezawa's vision.

I can absolutely see why some people would dislike this. It's probably a bit too light and ridiculous for anyone after some entertaining bloodshed. If you know what you're letting yourself in for, however, then I hope at least some others enjoy this as much as I did. It may even inspire someone to get their own modelling clay set and start working on their own short films. 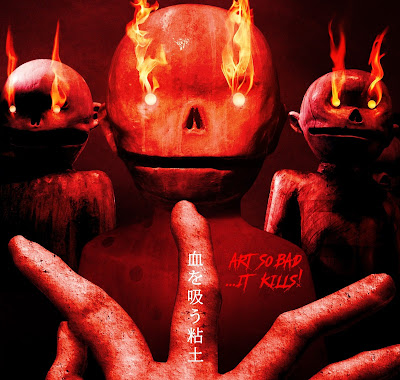