Japan seems to have a wealth of both urban legends and traditional myths that can reach from past centuries to still affect, and unsettle, those living in the modern age. You have the modern creations, such as Sadako and Kayako, you have the enduring and creepy imagery of the slit-mouthed woman, and you have ghosts and ghouls around every corner. Which means that you can usually take a gamble on one of their horror movies and find something to like, whether that is a creepy atmosphere, an interesting legend, or some unsettling death scenes.

Usually. Teketeke has none of those things though, sadly, and is perhaps the biggest disappointment I have seen within the realms of Japanese horror in the last two decades.

The main story concerns the spirit of a woman who appears, moving along on her front hands as she is missing her legs, and then cuts people in half. If she doesn't get her victim there and then, the clock starts. She will get them three days later. She is also drawn to the colour red, looking to get rid of anything of that colour because she associates it with, well, that's part of the backstory that isn't for me to reveal here. The two main potential victims are a young woman named Kana (Yûko Ôshima) and her cousin, Rie (Mami Yamasaki), racing against time to figure out what they can do to save their lives, and being helped by a young man named Takeda (Shin'nosuke Abe).

Unbeknownst to me, this was the second movie I watched in just over a week that was directed by Kôji Shiraishi. The last one was A Slit-Mouthed Woman, which I was also disappointed by. That looks a lot better now, however, when compared to this one. There's absolutely nothing here that's done as effectively as it could be. Even the main figure, someone who could put you on edge as she creeps into view, is shot in such a way as to make it seem silly. Oh, it's a woman running into view on her hands. That's it. To make up for the low budget, things are never in focus, the editing is choppy, and you don't get one proper look at what should have been the star of the show.

These problems plague almost every scene. Deaths are unspectacular, although you get a decent splash of blood on most occasions, tension is non-existent, and the camerawork is just downright annoying. And there's nothing else to distract you from the negatives. The backstory isn't interesting enough, the investigation to discover it means we get many scenes that we're already familiar with, having seen them done better in more enjoyable movies.

Ôshima and Yamasaki do well in their roles, as well as can be expected anyway, and they manage to make an impression simply due to the fact that they're in peril for the second half of the runtime. And the runtime is brief, which is another bonus.

I really can't think of one reason why people would watch this. Which, despite my complaints, doesn't mean it is one of the worst horror movies out there. It's just no good when compared to the many other Japanese horrors that you could check out. 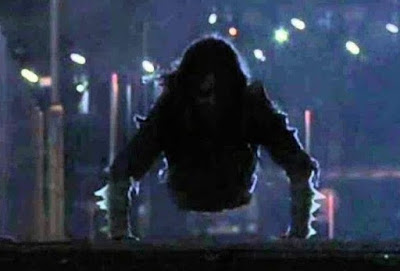