I hated most of my school years. Absolutely hated them. Schools are still pretty bad at being able to deal with bullying. Bullies are sly, their victims prefer to stay quiet. Telling teachers doesn't work, standing up to them can even lead to a fight which gets both of you in equal amounts of trouble, and you can't ignore a bully when they're in so many of your classes. Thankfully, you can mock them, you can get smarter than them, and you can eventually move from the area, build up your movie collection to an enviable amount, sit in your paid-up home, and mentally deliver a big fat "FUCK YOU" to all of those who helped to make your life an absolute nightmare for at least five years. Okay, that may be just me, but I am here to tell others that there is always hope. The weirdest thing about remembering those years, however, is remembering the times that I did the bullying. It happens. I still feel awful about it to this day. Trying to single out the kid who was a bit more different from the rest, trying to go along with a joke that was clearly making someone else miserable. Oh, they had dandruff (big deal), they weren't used to using deodorant yet (some people never learn, THAT'S when you need to address the issue), they were even poorer than I was, or they were just being far too annoying while also being physically weak, and therefore possibly beatable in a fight.

If you read that and I was ever involved in anything that made your life wretched and worse at an age when it should have been a lot easier just for us all to band together and battle through our education . . . please know that I am very sorry. I don't think I was ever a big threat to anyone, but I know (as much as I want to rewrite my own history) that I had some moments of being really shitty, for no other reason than to pass along the shittiness that I had been delivered by bullies.

I know, I know, you've once again stumbled on to a review here and wondered just what the hell I am wittering on about. Why this big tangent at the very start? Well, A Silent Voice is an imperfect film. The animation is nice, but not gorgeous. The characters, outwith the leads, aren't too memorable. The main story isn't really all that engrossing, in terms of how things ultimately develop en route to a third act. Yet it remains one of the best animated movies I have watched in some time, for one big reason. This film, more than any other, gives you an idea of the slippery slope of bullying, how easy it is to remain in that mindset, AND the ways in which bullying victims can continue to apologise and blame themselves for the actions of others.

The main strand of the narrative shows the relationship between Shoya and Shoko. Shoya is first shown planning a suicide attempt, and flashbacks show the life decisions that led him to that point, with the worst being his bullying of Shoko, a deaf girl first seen introduced as a new pupil at his school. As a youngster, Shoya really wasn't all that nice to some people, especially Shoka. But he improves as he gets older, although he moves through high school in an isolated and antisocial way, either deliberately keeping people away from him or assuming his past behaviour was already enough to cause them to want to avoid him. It's possible for people to change, especially moving from their younger years through their teens, and towards adulthood, but it can be a lot tougher when you consider the damage already caused to be irreparable.

Director Naoko Yamada has a decent selection of work in his filmography, from the look of things, but I am unfamiliar with anything else he has done (which is a lot of TV work, some OVAs, and less than a dozen movies). I may check out some of his other stuff one day, although I try to stick to individual movies rather than the wealth of episodic anime tales available out there, but the person who I need to remember from the list of credits here is writer Reiko Yoshida. He has a more extensive, and even more eclectic, filmography, and I am very interested in enjoying other tales from him, on the strength of his incisive work here, although perhaps I should also check out the source material by Yoshitoki Ōima.

The voice cast do well enough. Miyu Irino is the main voice for Shoya, Saori Hayami is the main voice for Shoko (although she says very few words, understandably), and the few other main voices are perfectly suitable, but the power of the film comes from the way it so beautifully illustrates different relationships and attitudes, rendering the vocal performances a distant second to the skillful visuals and artistic decisions.

Not everyone will get as much out of this. I am well aware that it resonated more strongly with me for a couple of different reasons (the spiral of self-loathing that motivates Shoya is also familiar to anyone who battles against depressive episodes). But I encourage everyone to give it a watch. Especially if, like me, you hadn't heard of it before. 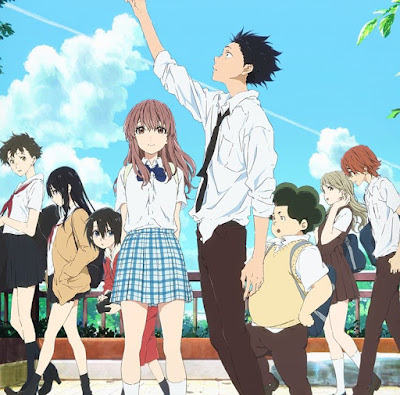