I'd watched a few too many animated Japanese movies in a row so decided to pick something live-action as I continued to explore the world of Japanese cinema this month. Seeing the thumbnail and clips of Gantz: O, it looked like a great option. It's a testament to the quality of the animation that it took me a good few minutes to realise I wasn't watching a live-action film. I knew there was something a bit off, but initially thought there may just be a bit too much CGI layered on for the action sequence that was kicking off the whole enterprise.

Based on a manga (isn't that the way for 90% of the major sci-fi and action movies from Japan), Gantz: O tells the story of a group of people who are given a second chance at life after an untimely death. The main character at the centre of things is Masaru Kato, a young man who is killed by a knife attack in a subway. He wakes up in a room with a few other individuals beside him, and a large black orb computer named Gantz. They're given suits, given a time limit, and sent to Osaka to kill some big monsters. Kill all the monsters within the time limit and all is well. Don't manage it and, well, it's game over, in more ways than one.

The first thing that struck me about Gantz: O was just how visually gorgeous it was. Considering I thought the opening moments were live-action, I was impressed by the polished and realistic nature of the CGI on display. Realism may start to fade away as the monsters get wilder and wilder, but the attention to detail remains throughout. You also get some imagery in the third act that wouldn't look out of place in an animated movie from the late, great Satoshi Kon, and I don't say that lightly. I am not sure if this is directly lifted from the source material or a decision made to create something vivid and memorable in the animated versions, but the monsters here are wonderfully ridiculous in ways that make them seem a bit silly until they start killing people.

Daisuke Ono does well in the voice of Kato, and Mao Ichimichi is equally good as Anzu Yamasaki, a member of a different monster-killing squad who connects with Kato. Saori Hayami voices Reika Shimohira and Shûichi Ikeda is Yoshikazu Suzuki, two team members fighting alongside Kato, and Kendô Kobayashi is Hachiro Oka, the stern and cold killer who often has a point with what he's saying, despite the fact that it goes against the helpful and more humane nature of our hero.

Directors Keiichi Saitô and Yasushi Kawamura have done a great job with material that is obviously designed to provide as many different adventures as you could wish for (as is the way with many manga premises). The initial exposition is done in a scene that gets the main character up to speed while the viewers learn everything alongside him, and more information is effectively drip-fed in between some eye-popping set-pieces, including a bittersweet revelation in the very last main sequence.

Having gone into this with no expectations (having no previous knowledge of the series, I was just hoping that I would be able to appreciate this as a standalone outing), I'm now looking forward to eventually watching other tales set in the Gantz world. It's a fun place to visit. 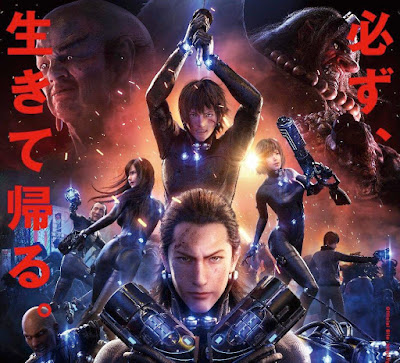