I really enjoyed Vengeance Is Mine, I am going out of my way to say that now, before I get myself too distracted with talk about things that aren't shown, or made immediately obvious, onscreen.

The film itself, you see, is relatively simple. Based on the novel by Ryûzô Saki, which was based on true events, it's the tale of a man, Iwao Enokizu, who became a wanted serial killer in Japan. Although not used in any way to justify what Iwao has become, we also see his background, in terms of the strained relationship he has with his father (Rentarô Mikuni), the long period of illness for his mother (Chôchô Miyako), and the turbulent time he has with his wife, Kazuko (Mitsuko Baishô). Closer to the present day, Iwao assumes a new identity while living at an inn run by the wily Hisano (Nijiko Kiyokawa), a woman not above essentially pimping out her daughter, Haru (Mayumi Ogawa).

Things begin with the capture of Iwao, there's no big surprise in where things are heading for the rest of the movie, and you then get a sequence that leads to a couple of grisly deaths. But that's it, for some time. Director Shôhei Imamura seems to know that a shock is required near the beginning, a depiction of the harsh crimes that Iwao is capable of, allowing him to then take us on the rest of the journey with a constant inability to predict just how Iwao will deal with people around him.

The performances are all very good. Ken Ogata plays Iwao, and he seems to fluctuate between keeping everything bottled inside in an unreadable way and unleashing his rage in an uncontrolled desire to just kill off whoever has caused his latest episode of feeling unsettled. Mikuni and Miyako both do well, and the former has much more to do onscreen, but the best moments come from the younger female characters, with both Baishô and Ogawa excelling as two young women who have their lives irrevocably altered by their relationship with Iwao. Kiyokawa is also very good, playing her character with a mix of shrewd cunning and the sort of short-sightedness that comes from expecting other humans to act like normal humans.

Coming back to make a narrative feature after about a decade of documentary film-making, Vengeance Is Mine may not just be the title of the film, it may be a defiant statement from Imamura, who seems intent on reminding audiences just what potential great movies they may have missed out on during the preceding years. It's also, and this is a highly arguable point, a title that I have taken to refer to someone else in the film. Iwao is not getting vengeance, his killing is so random and "unsatisfying", and nobody else in the film comes out of things with the feeling of any clear victory. But there's one person who keeps being the victim, despite never being killed, and it feels like there's something working to wreak vengeance upon them, specifically. This becomes clear in a number of scenes throughout the film, and notably in the odd final few shots.

I've yet to dig much more into the filmography of Imamura, having only seen this and one other film (The Ballad Of Narayama, enjoyable but underwhelming for me), but I have a lovely boxset that I will keep working through, even if it takes me years to do so, and hope more of his films are as interesting and thought-provoking as this one, which takes a standard serial killer thriller template and uses it to explore so much more. 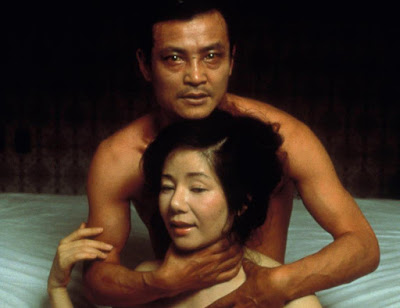