SPOILER WARNING - I have chosen to end this review with the final bit of dialogue from the movie. This isn't an effort to deliberately spoil it for those who have yet to see the film. It's for those who have seen the film to join me in basking in perhaps the most wonderful soliloquy to end any sci-fi movie, a movie speech that heartens me almost as much as the direct and beautiful plea to humanity made by Charlie Chaplin in The Great Dictator.

In essence, this fantastical sci-fi movie from the 1950s is a very simple tale, summed up in the title. Grant Williams plays the lead, Robert Scott Carey AKA Scott, a man we first see enjoying some leisure time on a boat with his wife, Louise (Randy Stuart). One encounter with a strange cloud later and Scott starts off on a road that will see him getting smaller and smaller. It's hard to be sure at first, months later he feels that his clothes are getting a bit bigger, but becomes easier to notice as he continues to shrink. There are physical threats to Scott, mainly from animals that quickly start to view him as a small pest, but it's the mental struggles that continue to bring things into focus, whether it's Scott struggling to feel like anything less than a burden to his wife or the dashing of his hopes when he becomes friends with a small woman named Clarice (April Kent) and then starts to become smaller than her.

Directed by Jack Arnold, The Incredible Shrinking Man shows the benefits of sticking to your guns when you have source material from the mind/pen of Richard Matheson. Richard Alan Simmons may have changed the structure slightly, the novel has the tale told in flashbacks, and there were scenes that just wouldn't fly on 1950s cinema screens, but the thoughtfulness and intelligence of Matheson shines through, his screenplay adapted with great care and respect by Arnold.

The cast are the least of the important elements here, although to dismiss them is to do them a disservice. Williams may seem a bit too disposable in the lead role, but when you consider how well he acts alongside a variety of special effects, and how well he moves from everyday figure to unnerved man, to emasculated husband, all the way to the man who will deliver that superb final speech, it's important to give him his due. Stuart does equally well in her portrayal of someone on the other side of the coin, as it were, and Kent makes a very good impression in her small role (no pun intended).

But it's the blend of ideas and special effects that make this one of the all-time great sci-fi movies. They may not hold up to the standards of the modern age, but there's still a lot here to admire as you watch Scott discover more and more dangers, and also more resources, around him as he continues his downward spiral towards . . . well, not knowing where it will all end is a large part of his ongoing fear.

I'm amazed that this concept hasn't been put to better use over the years. It seems to work best when people are shrunk and injected into other bodies (e.g. Fantastic Voyage and Innerspace), and I recommend The Incredible Shrinking Woman, a comedic riff on the concept with Lily Tomlin having fun in the lead role, but I can't think of anything that has really tapped into the potential of this idea since Honey, I Shrunk The Kids (1989, jeesh, that long ago). The Ant-Man movies don't count, they're Marvel movies, albeit fun ones. And Downsizing doesn't count, for no reason other than it's a ham-fisted message movie that forgets what it wants to say while ensuring that the main idea is drained of any ounce of fun.

See The Incredible Shrinking Man. It's well worth your time, an outstanding classic that you won't want to give short shrift (that pun WAS intended). Now only read the quoted dialogue below if you have already seen the movie. Otherwise, the review ends here.


I was continuing to shrink, to become... what? The infinitesimal? What was I? Still a human being? Or was I the man of the future? If there were other bursts of radiation, other clouds drifting across seas and continents, would other beings follow me into this vast new world? So close - the infinitesimal and the infinite. But suddenly, I knew they were really the two ends of the same concept. The unbelievably small and the unbelievably vast eventually meet - like the closing of a gigantic circle. I looked up, as if somehow I would grasp the heavens. The universe, worlds beyond number, God's silver tapestry spread across the night. And in that moment, I knew the answer to the riddle of the infinite. I had thought in terms of man's own limited dimension. I had presumed upon nature. That existence begins and ends is man's conception, not nature's. And I felt my body dwindling, melting, becoming nothing. My fears melted away. And in their place came acceptance. All this vast majesty of creation, it had to mean something. And then I meant something, too. Yes, smaller than the smallest, I meant something, too. To God, there is no zero. I still exist! 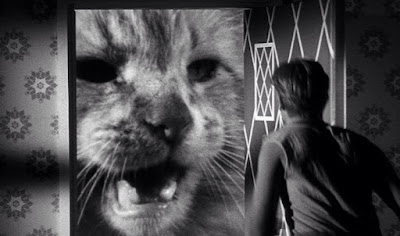