Considering the range of movies from around the world that Mubi provides, I did not expect it to get in the way of this Japanuary train I am on. And yet . . . here we are. So, with time of the essence, and nothing Japanese available from their selection just now, I have decided to take the opportunity to review a very recent movie that was the Mubi Go ticket for last week. Little Women.

Adapted from the source novel by Louisa May Alcott, of course, this is a near-perfect working of the tale from writer-director Greta Gerwig, providing a film that is as entertaining as it is thought-provoking, and showing that Ladybird was no fluke. In fact, although some may think I was a bit too flippant in my criticism of Ladybird, Little Women shows a huge improvement in almost every regard, and we should all appreciate that Gerwig gave herself the fairly daunting task of working on something far from guaranteed to give her more success. But more success she has gained, and rightly so.

I'm NOT going to cover the overall storyline of Little Women. Suffice to say, it is basically about four sisters (played here by Saoirse Ronan, Florence Pugh, Emma Watson, and Eliza Scanlen), their mother (Laura Dern), a charming young man (played by Timothée Chalamet), and ANOTHER charming young man (Louis Garrel). There is a framing device used here that takes the literary talent of Jo (Ronan, the lead character) and allows for some more playfulness than usual, in terms of both addressing attitudes of the time and also working with the audience expectations.

I'm going to mention the very small negative here first. It is an issue I have with the source material, therefore it's not something to blame on Gerwig and co. Beth March (Scanlen's character) is just one of those inherently irritating characters. Her only role is to be the vulnerable one who always seems to be weak or ill. I don't care how good she is at playing the piano, she's the most annoying member of the March clan, which is really saying something when you consider the actions of selfish Amy (Pugh).

Otherwise, there's nothing here I want to criticise. And, trust me, I have been giving it lots of thought since I left the cinema, wondering if my initial delight would settle down and allow me to reconsider anything. There's no need. Nothing to reconsider.

Not only has Gerwig given herself a great gift with her own screenplay, she has ensured it was all delivered exceptionally well by a near-flawless cast. Ronan is about as perfect a Jo March as you could hope for, Pugh is good enough to make Amy bearable during even her worst moments, Scanlen looks suitably fragile, and/or ill, and Watson does just fine as Meg, although she's perhaps stuck with the weakest moments in the film, mostly reduced to being overly earnest and only making one mistake on the road to finding her place in womanhood. Dern has to be 100% goodness and light, which she does admirably, and her sweetness is countered by the sharp tongue and mind of Aunt March (Meryl Streep on top form). Considering the focus of the tale, it's pleasantly surprising to find that all of the men are equally well-cast, and all of them get at least one or two great moments apiece. Chalamet is the charming and safe young star of the moment, and he's perfect here, while Garrel makes a strong impression with his small amount of screentime. Chris Cooper also makes the most of his role, Mr Laurence (the neighbour, and grandfather of Chalamet's character), James Norton plays a character who is perhaps the most grounded of everyone onscreen, Tracy Letts is a lot of fun as the editor who accepts Jo's writings, and Bob Odenkirk is always a welcome presence onscreen, albeit a bit surplus to requirements here as the mainly-absent patriarch of the March clan.

I can't think of a better way Gerwig could have handled this material. It has every main element from the book, of course, and yet it also feels fresh, full of energy, and completely relevant to today. Think of other adaptations of classic novels from the 1800s and they tend to have one main aim for the women, to find true love and marry into a happier life. Little Women has that notion in there, which was probably unavoidable, but it offsets that by showing the many and varied ways that everyone can follow their instincts to make themselves happy, make others happy, and make their own path through life, no matter where others may try to push them. It's a full, rich, experience that embodies the best of cinema, something that you can happily take as pure entertainment, and also something that gives you a lot of moments to think over and discuss with others. 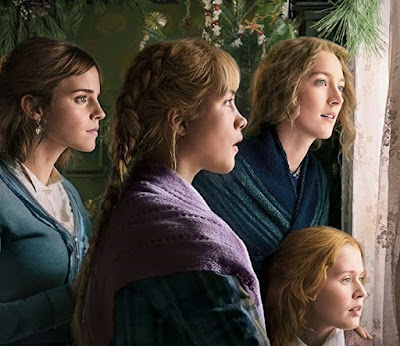