Haruna (played by Haruna Kawaguchi) and Mirai (played by Mirai Shida) are hosts of some little show that one of the producers wants to give a boost. That leads to them playing video footage that they have been sent, except it is different footage when played compared to what had been visible earlier. The footage was shot at Haruna's school, leading the show team to head there and try to get to the bottom of things. There are soon creepy things happening, a tragic backstory being revealed, and some wonderfully atmospheric moments showing people in peril while spirits start to become more and more numerous around them.

Taking the familiar found footage style and mixing in the idea of a whole film being cursed (and we're well aware of cursed filmed footage having a key place in last couple of decades of Japanese horror), P.O.V. - A Cursed Film spends a bit too much time in the first half trying to subtly build up the chills without any context for them. There's nothing especially wrong with the first 20-30 minutes, it just isn't half as good as the last two thirds of the film.

Writer-director Norio Tsuruta has thrown together a number of fun ideas here, and it's impressive that he's done it in a way that nicely balances a sense of knowing playfulness with a handful of properly creepy moments. As well as the more obvious touchstones, this feels very much indebted to Don't Look Up, certainly by the time the last few scenes play out before the END end credits (there are a few end credits here, so don't turn the film off prematurely or you'll miss out on quite a bit).

Kawaguchi and Shida don't have to do anything too strenuous, considering they are playing characters with their own names and are positioned in scenes that have spooky things going on around them, but they do well enough. There are a few other key supporting players, but the focus stays on the two girls, when it isn't on whatever has been captured on film. Their interactions with one another, and reactions to things, are all very believable. If anything, they consistently prove that most young Japanese girls are still a lot braver than I am, even when they're petrified.

Although I mentioned the fact that the last two thirds of this film are better than the opening act, that won't necessarily be the case for some, who I suspect may lose interest during the last 5-10 minutes. Things take a further turn that you have to get on board with, twisting the onscreen events into something arguably more interesting and sophisticated than the opening scenes would suggest. Subtlety has long gone, and the layers between viewer and footage start to blur and bleed into one another. In some ways, it's very silly. In other ways, it works. It's a tale within a tale within a tale (within a tale?), and that approach is certainly more interesting than what could have easily been an enjoyable, but altogether familiar, found footage to sit alongside the hundreds of others from the past couple of decades.

It doesn't quite get either end of the fear spectrum exactly right, the subtle moments are too subtle and the outright madness of the finale would have been better if there had been an attempt made to slide things into place a bit more smoothly, but this is still worth your time. Even if it's not one you'll ever want to revisit.

This is a region 3 disc (you have been warned). 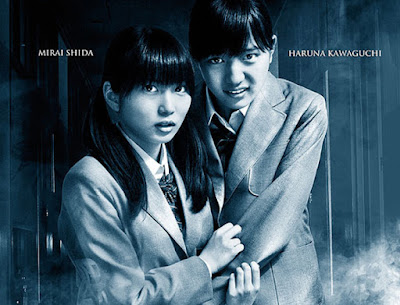