A splattery body horror flick with some great set-pieces and one hell of a punchline, Meatball Machine is a lot of fun for those after some gory practical effects. If you liked films such as Machine Girl and Tokyo Gore Police then I think you'll like this one.

Issei Takahashi plays Yôji, a factory worker who falls for a young woman named Sachiko (Aoba Kawai). After saving her from an assault, Yôji ends up with Sachiko back at his home, but his timing is lousy. He also has some kind of insectoid in his home that he recently found, and this infects Sachiko and transforms her into something called a NecroBorg. Yôji also becomes transformed, not long after Sachiko, and the two end up battling one another.

Based on a short film by Jun'ichi Yamamoto, who gets a credit here alongside director Yūdai Yamaguchi, Meatball Machine is silly and over the top from start to finish. You get to see some extreme violence and gore before you really have a clue what's going on, because a proper explanation is provided at about the halfway mark, but that's fine, because this is being sold on the violence and gore. It's one of those films in which nobody is killed in a way that sees them slumping out of shot as they breathe their last. No, everyone dies with lots of physical trauma involved, and geysers of blood spraying everywhere.

The screenplay by Jun'ya Katô is, in many ways, what you expect, but has one or two nice surprises tucked away in there, mainly in the third act. There are many different ways this material could have been played, and it's admirable that it gets pretty wild with no real care given for the humans caught up in the middle of the body-changing nastiness.

Takahashi and Kawai are fine, making a decent impression before they're transformed. And Takahashi even manages to somehow keep showing his humanity striving to stay present while he's in full NecroBorg form. The other main character is played by Kenichi Kawasaki, a father who has already seen his daughter afflicted and is out to kill as many of the mutated creations as he can. Kawasaki does well, bursting in with a good bit of exposition that makes everything clear before opening the floodgates to the blood-soaked third act.

If there's one major problem with Meatball Machine, and I realise this may seem silly to say, it's that it doesn't have anything else going on below the surface. I know that some others do get a bit more from it, but it just felt like an FX showcase without any substance to it. Not that there has to be any more to it, especially when the gory set-pieces are so much fun, but it's easy to see how this may have made a more impactful short than the expanded feature.

Still, this is recommended for those who know what they're getting in to. 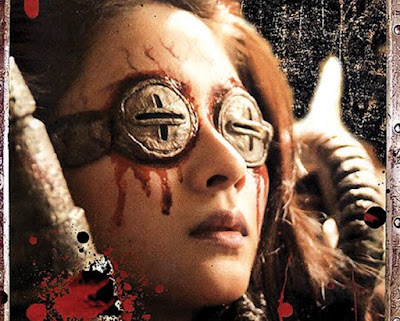