Written and directed by Makoto Shinkai, Your Name is another animated film that works best when really nailing down the feelings that can overwhelm you during your teenage years. Unfortunately, there are one or two plot elements that stop it from coming together as well as it should, but that doesn't stop it from being another excellent slice of animation for fans of Japanese cinema.

Mitsuha Miyamizu lives in the small town of Itomori in Japan. Taki Tachibana lives in Tokyo. For reasons that are never really explained, and no concrete explanation is necessary, the two start switching bodies. This causes some confusion, of course, but it soon becomes clear that both of these individuals can bring out the best in one another, with Taki helping Mitsuha to become more popular with schoolfriends and Mitsuha helping Taki get a date with Miki Okudera, a young woman who works with him at his part-time job. Putting a system in place, involving notes written on paper and in their phones, the two start to work well together, but it becomes increasingly frustrating to live in such harmony with someone else you haven't met. As the two try to make a real meeting happen, some more details come to light that make things even more frustrating.

There's a good voice cast here. Ryûnosuke Kamiki and Mone Kamishiraishi do well in the roles of Taki and Mitsuha, respectively, Masami Nagasawa is very good as Ms. Okudera, and there are solid supporting turns from Etsuko Ichihara, Ryô Narita, Aoi Yûki, Nobunaga Shimazakim, Kaito Ishikawa, and Kanon Tani, all portraying friends or family members. Everyone is suited to their character.

Aside from those vocal performances, which are straightforward enough, Your Name is an interesting film for a number of reasons. It's not the best Japanese animation you could choose, in any regard. The script has one or two big plot holes in there, as is often the way with any tale that moves the pieces around in the way that this one does, there are some horrible song lyrics popping up all too frequently to underscore a number of big scenes, and even the look and movement of the animation isn't up there with the best. It's still nice to look at, you just have to bear in mind that there's a very high standard when measuring any Japanese animation against the best of their output.

The other main reason for this being so interesting is the way in which it takes such a fantastical premise, adds even more to it, and uses the whole thing to ground the main ideas of navigating some turbulent teenage times and perhaps finding someone who brings out the best in you. Mitsuha and Taki seem to be two parts of a whole person, both literally and metaphorically, and their strange bond leads to them eventually considering that they might work just as well together while inhabiting their own bodies.

Shinkai does a good enough job with everything to almost distract you from the minor failings, but the third act goes on for just a little bit too long, giving you enough thinking time to go over everything that just happened and wonder how it all worked out. Still, good on him for tying together a number of different threads and making something that manages to slide so smoothly through a number of different subgenres. 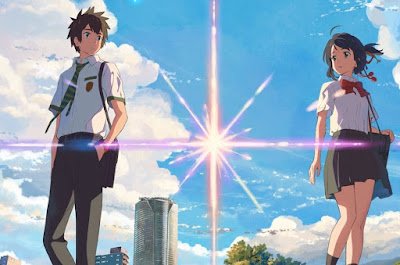