AKA The Big Tits Dragon AKA BTZ.

A film that epitomises the very worst of the kind of content that can sometimes be churned out by the Japanese, BTZ (I'm going to refer to it as that, any other full title is just ridiculous) is full of puerile humour and silliness from start to finish. There are one or two highlights, and they're not necessarily what you might be thinking, but it's generally a poor viewing experience, and a surprisingly dull one, that at least has the decency to be over and done with in about 80 minutes, before the end credits roll.

The simple plot sees a bunch of strippers accidentally unleashing a horde of zombies when one of them (Maria, played by Mari Sakurai) reads from a Book Of The Dead that has been carelessly left in some tunnels under a strip club. The undead start to cause problems for the women, there's a bit of gratuitous nudity, and one scene I can never unsee features a bitten woman displaying a mutated and spiky vulva that shoots fire. There's a sentence I never thought I would type out.

Directed by Takao Nakano, who also wrote the screenplay (adapted from a manga series, because of course it is), this is one of a number of movies to come up with the seemingly brilliant premise of pitting zombies against strippers. I can see why that's an appealing idea, certainly for anyone marketing a film to the casual male film fan who wants something he can throw on at the weekend while he has some snacks and drinks. Like a bit of gore and bloodshed? Yes. Like attractive women getting gratuitously naked? Yes. Here you go.

And yet, as hard as this may be for some people to accept, a film often needs more than just those things. A bit of wit is often the key to improving the whole thing, and that's something generally lacking here. Although BTZ is not lacking in humour, and one or two gags land, it's usually aimed too low, satisfying none but the most immature of viewers. Considering the fact that only one or two of the main characters make any kind of impression, the special effects aren't very special (you get disappointing CGI and the crudest practical appliances on display here), and the gore quotient is disappointing, and you can already see why this proves ultimately disappointing.

Sakurai is one of the few to be able to make her character stand out, mainly thanks to her way of dealing with the discovery, and subsequent zombies. Sora Aio, Risa Kasumi, and Tamayo also do decent work, respectively portraying the characters of Lena, Ginko, and Nene. Could I tell you right now exactly how things panned out for every one of them? No, I've forgotten most of this film already, doing my damnedest to write this review before more details escape like tiny leaves from an ever-so-slightly split teabag. But I remember generally liking those four leads.

If you're making a film that is essentially a joke then the joke needs to be funny. BTZ isn't funny, or at least it's certainly not funny enough to warrant the feature length. Which leaves you with a film that isn't good enough to provide a few chuckles, isn't gory or violent enough to please horror fans, and doesn't even throw in the level of nudity that the title promises. I'd be curious to know if anyone actually saw and enjoyed it. 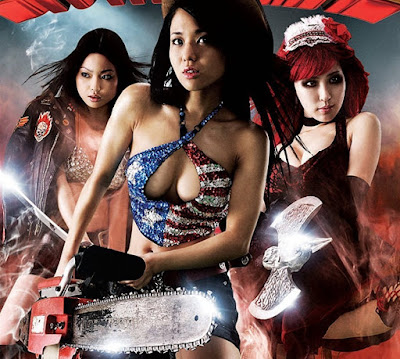