Based on the comics by celebrated artist Junji Ito (the man who also conceived of the spiralling horrors in Uzumaki), Tomie is a character who has featured in nine movies, to date. The main power she has is the ability to resurrect after death, but she also drives others to madness, and can create more and more copies of herself (something that is used most effectively in the 2011 film, the last one to have been made just now, Tomie Unlimited).

This particular tale begins with Tomie (played this time around by Miki Sakai) being killed by her artist boyfriend, Hideo (Shûgo Oshinari). He two friends (Shun'ichi and Takumi) to help him bury the body and cover up the crime, which doesn't really matter when Tomie reappears in their lives. She begins to exact her revenge, even if that revenge means sometimes sacrificing her physical body to people who end up with murderous intent on their minds.

Directed by Takashi Shimizu (the man who gave us so many movies in the popular, and effective, Ju-on series), this is a decent enough Tomie tale, albeit one that is deliberately subtle and slow-paced, yet it seems to once again miss out on the huge potential of the character. I'm not sure how the source material makes use of this creation, and I'm sadly still lacking in my knowledge of most of the other movie versions, but Tomie can be used to explore so much, from toxic relationships to partners who are overprotective and stifling (which I realise still counts as a toxic relationship, I am just defining different aspects), from the shared female experience as they so often face the same troubles while navigating the minefield of relationships to self-identity, from peer pressure to victim blaming. Unfortunately, all of that seems to be kept below the surface, although it's often churning and raging there like a river flowing beneath a thin layer of ice.

I'm not going to blame Shimizu entirely for this. He seems to know that the subject matter isn't a traditional horror, and subsequently refuses to delve into his usual grab bag of scares and jumps, but he relies on a script, by Yoshinobu Fujioka (who also the next film in the series), that seems to cast the more interesting elements aside in order to focus on a typical supernatural entity out for revenge plot. Perhaps those tackling the material don't know where to begin when it comes to unpacking the possibilities. Perhaps Ito left all of that aside anyway, figuring that no artists could more effectively comment on something that could provide viewers/readers with hours and days of deliberation and conversation.

The cast do a decent enough job, I guess I'd better say that before I wrap things up here. Sakai is appropriately pretty and passive throughout most of the film, even as things get wilder and more dangerous for her. Masaya Kikawada and Satoshi Tsumabuki are the males who spend most of the time being slowly tortured, and Kumiko Endô is a young woman who also gets caught up in the strands of webbing that Tomie can spread far and wide as she allows people to weave their own nooses.

If you get the chance to check out any Tomie movies then please do so. You can, from my limited experience, jump into any one without needing to be familiar with the others. As long as you know the essence of the character, as explained here, you'll be fine. Tomie: Re-birth is slightly better than the only other one I have seen, so far, and I look forward to checking out the others. Going by my usual schedule, I should get to another one by about 2027.

Get yourself some art here.
And here is the main site for all things Junji Ito. 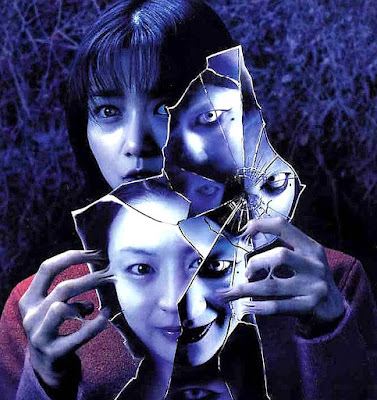