Although you may worry whenever you hear the words "a film directed by Robert Zemeckis that also serves as an FX showcase", there's really no need. In fact, it's worth remembering that Zemeckis spent many years perfectly marrying entertaining concepts to the latest technology that would help him best present things. Then he got a bit carried away with himself.

Death Becomes Her is the tale of a man (Dr. Ernest Menville, played by Bruce Willis) who leaves his girlfriend (Helen Sharp, played by Goldie Hawn) to embark on a life with a famous and beautiful actress (Madeline Ashton, played by Meryl Streep). This changes all three individuals for the worse. Ernest becomes bitter, and drinks excessively while he works on dead bodies. Madeline is afraid of ageing, and seeks solace in the company of at least one younger man. And Helen is just miserable at what she lost, and wants some revenge. When the day comes for that revenge to take place, everything is complicated by the fact that Madeline has managed to get her hands on a potion that will give her immortality. But being immortal means you really need to look after the one body you have.

Written by Martin Donovan and David Koepp, this is a wonderful black comedy that blends The Picture Of Dorian Grey with no small amount of Sunset Blvd. Although these three characters could have been from any walk of life, the fact that one is a doctor and one an actress allows for some more pointed digs at the notions of vanity, the pressures on so many in the entertainment industry to have cosmetic surgery, and the attitudes and failings of people who cannot find themselves content with all of their blessings in life.

Zemeckis does a great job here. Using the first half of the film to weave lots of fun jokes in between the character development (there's not much, but it's there) before treating the halfway point as a turnstile into the FX-laden second half, which leads to plenty of superb visual gags working alongside the dialogue. The special effects, a mix of practical gags and computer work, hold up brilliantly. Almost thirty years later, this is better than even some major films released in the last decade.

Although she didn't enjoy the experience of working with all of the special effects, Streep is on top form in her role. All three leads are great, with Willis being atypically schlubby and Hawn a bit more calculating and sharp than usual, but Streep stays just a little ahead of everyone, thanks to it being quite a different role for her and the fact that she's the focus of many of the memorable effects. Ian Ogilvy also raises a smile in his brief appearance, and Isabella Rossellini is the mysterious and alluring woman who offers up the chance of immortality before belatedly adding words of caution.

Not entirely dissimilar to many short tales that have warned us against the perils of trying to gain immortality (from the many miserable vampires who have found the experience lacking to the kind of stories you get from Ray Bradbury and Tales From The Crypt, to name just a couple), Death Becomes Her is slick, macabre fun that also proves to be eminently rewatchable. 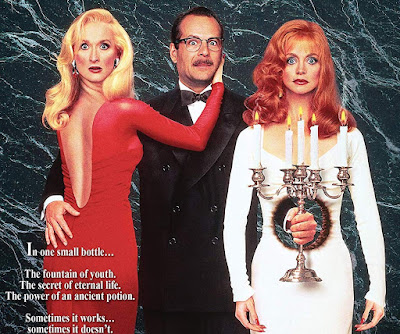