A title I have been aware of for years, but somehow never got around to seeing, Mirror Mirror is a decent enough, if unspectacular, horror movie that benefits from some interesting names in the supporting cast.

Rainbow Harvest stars as Megan Gordon, a young woman who has just moved into a new home with her mother, Susan (Karen Black). Moving into a new home means also integrating into a new school crowd, which Megan finds difficult. But things look set to improve when she makes a friend in Nikki (Kristin Dattilo). They may improve even more as she starts to inadvertently draw some power from a mirror that sits in her new home.

Directed by Marina Sargenti, who also co-wrote the screenplay with about three other people, this is an odd, but not unsatisfying, mix of offbeat character moments and standard “Carrie-esque” fare. The mirror itself may be the main supernatural force at the heart of the film, but everything becomes much more interesting when Megan starts to realise what is going on, and subsequently starts to enjoy her power. It's worth noting, however, that this is a tame horror movie, with the death scenes lacking any major bloodshed and gore. Not that any horror always needs loads of the red stuff, but this would have been more fun with added splatter. At least there are some good special effects used in a couple of key scenes.

Harvest is good in the main role, maintaining a persona that never feels completely malicious, even as her actions become worse and worse. Dattilo is perfectly fine in her role, even if it is a much easier one, and Charlie Spradling is good value as the bully, Charleen. There are some young males in the cast, but they make much less of an impression. Karen Black doesn’t get enough screentime, despite having a couple of superb scenes with the inimitable William Sanderson, but you do get a decent number of little scenes featuring the much-loved Yvonne De Carlo (playing someone who learn of the history attached to the mirror), and that makes everything better.

Very derivative, easily forgettable, and lacking one standout sequence to make it one to recommend, Mirror Mirror nevertheless entertains for the runtime. And I will inevitably check out the sequels one day. 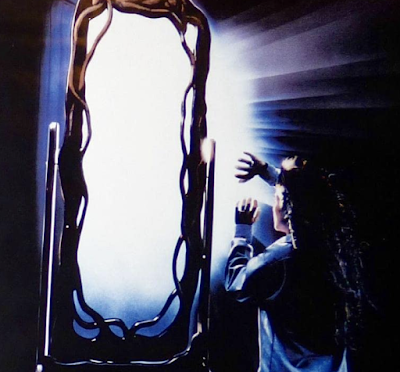