Written and directed by Bruce R. Cook, his second of only two films he directed, Nightwish is just the right kind of bonkers for anyone hankering for that wonderfully silly ‘80s horror vibe. It was suggested to me after I laid some praise on Spookies, and it’s easy to see why.

The plot concerns a careless professor taking a bunch of students to a house that they’re going to investigate. There’s also a machine that has people trying to control their dreams and deal with their fears. What that means is that you get a feature mixing supernatural shenanigans, a hefty dose of treachery, and even some potential alien activity. It’s best described as From Beyond crossed with The Legend Of Hell House, via a number of X-Files episodes.

Although he continues to take things further and further into the realm of the ridiculous, Cook actually does a decent enough job with his writing and direction. The science is all for the sake of the movie, aka completely unbelievable, the characters are bearable, enough to care about, but also disposable when the threat of death grows, and there are some fun effects dotted throughout. The dialogue is also in line with how the film is playing out, which means that you shouldn't come here if you're in the mood for some Shakespeare, but it's perfectly fine for a fun genre film.

Brian Thompson is probably the biggest name in the cast, but he only has a few minutes of screentime, effectively bookending the central section of the film. Jack Starrett is the professor, and enjoys taking his performance from calm civility to dangerous "captor" once others start to become reluctant about everything going on. Elizabeth Kaitan and Alisha Das are the main ladies, Donna and Kim, and both do fine in their roles, while other people hang around and wait to be imperilled.

There's so much going on here that it's impossible for me to figure out just how much to put into this review. I worry that mentioning too many details will have you expecting one specific kind of film while Nightwish actually wants to deliver about ten different film plots to you. It's a gleeful mish-mash of stuff that could have easily been reworked into parody, and I admire the fact that it seems to be playing the whole thing relatively straight, despite sometimes getting very close to The Rocky Horror Picture Show.

Special effects from KNB help, but not as much as the overall feeling of an earnest desire to entertain. It's all very silly, and doesn't once even accidentally get close to creating any tension in the second half, but it's an easy one to watch and enjoy. If you're not smiling by the time you get to the inevitable stinger in the final scenes then I don't know what to tell you . . . we're just very different people who can take movies in very different ways. 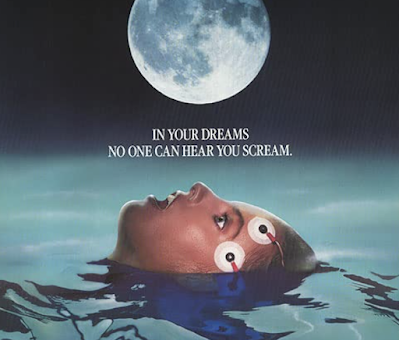