If you wanted to remake Waterworld for the cost of a few quid, and add a load of sharks, then you would probably end up with Planet Of The Sharks, a terrible film that I find myself now trying to review.

The story is simple, yet also more complicated at times than it needs to be. All you need to know is that our planet has become flooded. And the food chain has changed, putting sharks at the very top. A small group of people have an idea of how to try and improve the situation, and viewers get to see their journey. Which is nowhere near as exciting as it should be.

Directed by Mark Atkins, someone who has done a number of films in this vein (as is so often the way), Planet Of The Sharks wants to mix some post-apocalyptic shenanigans with plenty of shark activity, which is commendable. Unfortunately, Atkins has neither the budget nor the skill to make something pacey and entertaining. He also doesn’t have a decent script, working from an awfully dull creation co-written by himself and Marc Gottlieb. I watched this late in the afternoon, fully fed and caffeinated, and I still almost fell asleep once or twice. I know it can happen, but it always amazes me when people make a film based around sharks SO dull.

The cast do nothing to help matters. Brandon Auret, Stephanie Beran, and Lindsay Sullivan are the nominal leads, aside from the sharks, but none of them have any real presence. I wish I could say the same for Angie Teodora Dick, playing a character so annoying that I wanted her to be eaten within seconds of her first appearance.

And speaking of the characters, giving your characters names of famous people, or names that reference other films, isn't enough to make your film a fun, cine-literate, experience. I admit that when I found out the annoying character played by Dick was called Joanne D'amato I thought that wasn't a bad way to namecheck someone, but having someone just called Dr. Caroline Munro? You may as well just call your leads Peeta Cushing and Kristoff Earl Lee, with room for Bella Lugosi, Doris Karloff, etc. Those names would be more amusing than simply using the real name of someone that genre fans have enjoyed through the decades.

I know what I am letting myself in for with these movies, and those who know me already know that about me, but there are still many movies of this ilk that provide simple entertainment for those undemanding in their creature feature viewing habits. Planet Of The Sharks doesn't do that. One to avoid, although I'll grudgingly admit that a number of the CGI moments weren't as bad as I expected them to be. 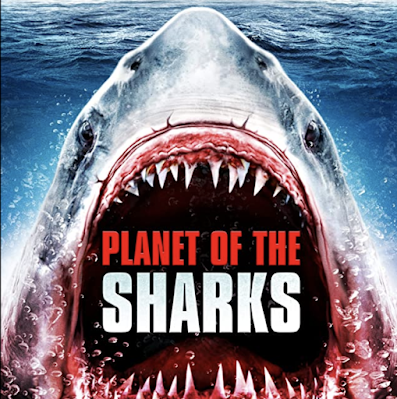