If the past year or so has taught us anything, impact of a global pandemic aside, it is never to move in to a house with Amanda Seyfried. She just doesn't seem to have any luck with it. The biggest worry for most of us is watching the movers take our things in and out, and wincing if a beloved item of furniture is bumped and forced through a doorway that looks a bit too small for it. Seyfried seems to have a knack for finding haunted houses, which can make for a more nerve-wracking experience than sorting through bags to find the one that you stashed the bath towels in.

Seyfried plays Catherine Claire, a talented artist who has given up most of what she enjoys in life to support her husband, George (James Norton), and look after their young daughter, Franny (Ana Sophia Heger). Catherine also has an ongoing battle with an eating disorder, seems to be more susceptible to tales of spookiness, according to George, and looks to be a bit unhappy with her life. George, on the other hand, is feeling great about things. He's now the college professor he always wanted to be, he starts having an affair with a young local woman (Willis, played by Natalia Dyer), and his life is almost exactly as he wants it to be. George isn't really a nice man though, and a lot of his current situation may have been created by some cheating and manipulation.

Co-directed and co-written by Shari Springer Berman and Robert Pulcini, adapting "All Things Cease To Appear", the novel by Elizabeth Brundage, it's no surprise to see that neither Berman nor Pulcini have any other horror movies in their main filmography. They deliver some great little chills throughout this movie, but they're more interested in showing the extensive damage in the relationship between Catherine and George, and how George has been causing this for a number of years, but it was easier to overlook when creating fault lines under the surface. You also get an ending that, while satisfying, actually moves away from delivering some better horror and supernatural twists.

Seyfried is as good as ever in the lead role, easy to root for as he gets angrier and tougher in the second half. Norton does well as someone it's easy to hate, starting with an air of entitlement and arrogance before becoming worse and worse. Heger doesn't get too much to do, but she certainly does decent work. Dyer is saddled with one of the weakest characters, but she does okay, Alex Neustaedter and Jack Gore are good as a couple of young brothers who come around to help at the house (and also lived there at one point), F. Murray Abraham is a welcome presence, and I hope this is the first of many more worthwhile film roles for the talented Rhea Seehorn. I should also mention the small role for Karen Allen, someone else I am always happy to see in anything.

It's not that Things Heard And Seen is bad, or boring. It does everything well enough, including an ending that focuses on details that were signposted elsewhere in the movie. I just can't help but think of the third act as a missed opportunity, for reasons I won't go into here (because of spoilers), and that makes me then think that the rest of the film could have been tweaked and improved here and there. It never really feels as if it does more than coast along, and Berman and Pulcini seem to steadfastly refuse to turn the screws when they have chances to ratchet up the tension. The end result is something that's decent, but also so safe that it's also a bit disappointing. 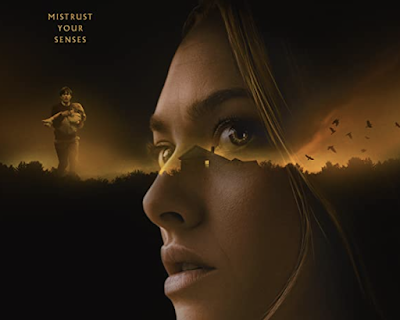