Barry (Gary Green) is a drug addict, a terrible partner to a woman named Suz (Chanelle de Jager), and a general waste of space. Which makes it harder for anyone to notice a major difference when his body is taken over by an alien, making him a walking flesh-suit keen to explore the streets and people of South Africa. Lucky for Barry, or maybe not, he seems to have a new way with people, attracting others who are as . . . idiosyncratic as himself, and somehow emanating an aura of desirability that make many women immediately want to have sex with him.

Written and directed by Ryan Kruger, fleshing out a short from a few years ago, Fried Barry is a decent idea that allows Kruger to work within a very low budget and still show what he's capable of. I'm disappointed that he didn't title it "Under The Foreskin", but that's for my own amusement. Having said that Kruger both wrote and directed this, it's worth correcting myself slightly to say that many of the scenes were improvised or workshopped with the cast.

Green may have some of the least amount of acting experience of those onscreen, having worked as a stuntman for some time, but his performance, more directly controlled by Kruger, is a fantastic one. His character is unsavoury, unrepentant, and completely free from social and moral norms. It's part of the fun to see him suddenly encounter this opportunity for fleeting happiness, and he manages to be odd and inquisitive without being too far removed from the selfish man we saw in the very first scenes. De Jager has some memorable rants, and does great in her main supporting role, and Bianka Hartenstein is equally good as a prostitute who has a life-changing encounter with Barry. You also get people popping up who don't mind doing a bit of impromptu dentistry (Jonathan Pienaar being gleefully sadistic), a number of patients in a psychiatric hospital who don't view Barry as being all that odd, and someone popping up at the start of the film to remind you of the meaning of film certification, in a clip that will make viewers of a certain age smile as they remember being given the same information from Simon Bates before most feature films on VHS.

The big problem with Fried Barry is the fact that it has little point. The central character gets to wallow in his preferred lifestyle, observations of human behaviour are filtered through the life of Barry, and even the inserted moments for the VHS generation (e.g. that certification intro just mentioned) are spliced in with no real reason, as enjoyable as they are. Not that every film has to have some big point to make, or commentary running through it, but Fried Barry seems like it will have both of those things, and then it doesn't.

I had a lot of fun with this, and Kruger has definitely marked himself out as someone to keep an eye on. I just wish it hadn't felt QUITE so random and pointless (pointless as in avoiding any real comment, not pointless as a viewing experience) by the time the end credits rolled. 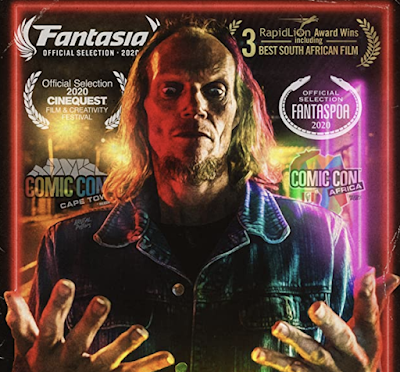