Netflix And Chill: The Mitchells Vs The Machines (2021)

Sometimes you cannot stop hearing about a new movie that everyone has been watching, and enjoying, and that was the case with The Mitchells Vs The Machines. I tried to keep my expectations in check, but I must admit that hearing almost unanimous praise for it made me think I was going to really like it. I also thought it was made by producers Phil Lord and Chris Miller, considering how many people had to mention them while discussing the film (and I guess I just joined them). It's actually directed and co-written by Mike Rianda and Jeff Rowe, although it definitely fits nicely within the selection of brilliant animated movies that Lord and Miller have delivered to audiences over the last decade or so.

Young Katie Mitchell is an aspiring film-maker who has just been accepted into a film school in California. The night before she is due to head off, however, her technophobic father, Rick, breaks her laptop, which could be the final nail in the coffin for their already-strained relationship. Desperate to think of a way to make amends, Rick decides to cancel Katie's flight, and packs up the car for a road trip for the whole family. That's him, Katie, Linda (Katie's mother), Aaron (Katie's younger brother), and a goofy dog named Monchi. As they drive on their lengthy trip, it eventually becomes apparent that there's an apocalyptic robot uprising taking place, all because a tech guru made a show of dismissing some super-smart computer AI for an upgraded line of robots that he assures everybody would never turn evil and try to destroy humanity . . . mere seconds before they all turn evil and try to destroy humanity.

With an energetic animation style that may put some people off, and a runtime that is closer to two hours than ninety minutes, there's a feeling here that this is a film made by people who were allowed to have as much fun as possible, and incorporate a multitude of gags and homages within the storyline. It generally works really well though, and that approach allows the wide range of references and in-jokes to play out without feeling dated (not something I would always say about a film that features a Kill Bill reference, for example, although the fact that it's also very much playing on the Lone Wolf & Cub imagery also helps).

The voice cast is pretty perfect throughout. The Mitchell family are made up of Danny McBride (Rick/Dad), Maya Rudolph (Linda/Mum), Mike Rianda (Aaron), and Abbi Jacobson (Katie). They interact so well as a family unit that there are times when you can easily forget this is an animated movie. And the rest of the cast is full of delights, from Olivia Colman as PAL, the AI, to Fred Armisen and Beck Bennett as a pair of confused robots. There's a "perfect" set of neighbours, with the adults voiced by Chrissy Teigen and John Legend, a small role for Conan O'Brien, and some great Furby sound effects for one main sequence.

The lessons learned are ones that we've mainly seen before, but there's a rather unique viewpoint offered when Mr. Mitchell finally realises just how good the creative work of his daughter is, and why she puts so much energy into something that it turns out a lot of other people enjoy. It's something that a lot of young viewers will relate to, and maybe even a number of adults who have yet to realise that the only thing that matters when doing something you love is that YOU enjoy doing it (case in point . . . this blog).

Well worth seeing, and with definite sequel potential, The Mitchells Vs The Machines could have been a perfect 90-100 minute movie. It is, instead, a really good 113 minutes. That time spent in the company of it isn't wasted, but it notably affects the pacing, mostly in the first half. 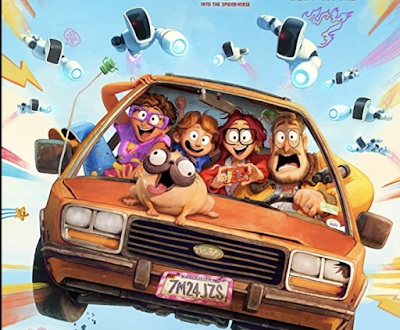