Okay, here's the thing about my review of Rocketman. I had to decide early on whether I wanted to mention Bohemian Rhapsody. Part of me thought it was unfair to do a piece comparing and contrasting the two. Another part of me realised that this film highlights just how much was wrong with the other film, and they do have a lot of connective tissue (from the onscreen subject matter to the use of Dexter Fletcher behind the camera).

This is the story of how Elton John became Elton John, from his humble and quite difficult childhood years, as Reginald Dwight, through a number of years blurred by a quest for love that also saw him embracing excess in every part of his life, from his stage presence to his problems with alcohol and drugs. That's about all you need to know about this musical journey through the life of Elton John. And it obviously helps if you like at least some of his songs . . . and who doesn't like at least some of his songs?

The best decisions made by director Dexter Fletcher and writer Lee Hall involve the staging of this material. What you get is a proper musical, with a proper feeling of artifice at every turn. Hall has a solid background in films that either make great use of music or adapt stage work to screen (having worked on the likes of Billy Elliot, War Horse, and, errrrr, Cats). And Fletcher had a big hit with the film adaptation of Sunshine On Leith, of course, and seems to have a knack for creating rousing moments that prove to be easy audience-pleasers. It helps that Elton himself is the kind of figure you can imagine seeing the world in such an overdone and stylish way, working for many years with a hazy filter of booze and drugs over his trademark spectacles.

Taron Egerton is superb in the lead role, very much a believable combination of the tortured artist and the constant showman. It's a superb transformation, and arguably his best onscreen performance to date (which comes after a burgeoning career already full of pretty great turns). Jamie Bell is Bernie Taupin, a vital figure in Elton's life, and he's okay, left to be the one really decent figure in a sea of people who seem to be either manipulating or using our lead, or both. Bryce Dallas Howard and Steven Mackintosh are fairly horrible parents, but both are outshone by the deliberate coldness and cruelty of John Reid, which allows Richard Madden to impress in a performance that paints him in a very unflattering light, both physically and in terms of his character.

Although there are moments in which Elton John licks his wounds and indulges in a session or two of self-pity, deservedly so, the other big plus about the film is the self-awareness. We're not being shown a saint, at times we're not even being shown someone being very nice at all. We're shown someone with a huge amount of talent who took a long time to find the coping mechanisms required to maintain some kind of mental equilibrium. And he's often mistreated by those who should have been there to help him.

It's a happy film, overall, but there's plenty of unhappiness to wade through on the way to the ending we all know is waiting. The songs help to offset the darker moments, as do the wardrobe choices and the cutting wit of the dialogue at times. It's also deceptively inspiring. I hope anyone who has spent time trying to maintain toxic relationships can look at this and realise that cutting those people from your life can absolutely complement any attempt to cut out any health-endangering vice that you may have. As the life of Elton John proves, you can start to focus on your health and true happiness at any age. You may stumble, you may not always have the focus or motivation, but making that start is the best thing you can do. And it may just lead to a whole new lease of life for you. It did for him.

And one last testament to the film, I wrote this review while listening to a playlist of Elton John songs. Because I was reminded of how many of them I really like.

Here's the bit everyone ignores . . .
If you have enjoyed this, or any other, review on the blog then do consider the following ways to show your appreciation. A subscription/follow costs nothing.
It also costs nothing to like/subscribe to the YouTube channel attached to the podcast I am part of - https://www.youtube.com/channel/UCErkxBO0xds5qd_rhjFgDmA
Or you may have a couple of quid to throw at me, in Ko-fi form - https://ko-fi.com/kevinmatthews 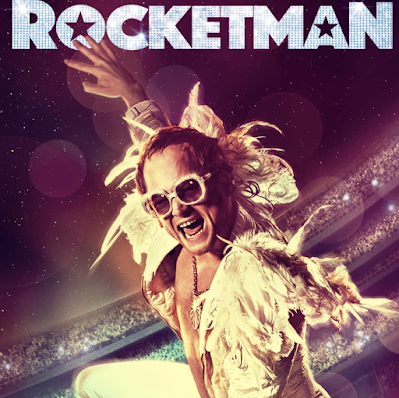