First of all, before anyone gets the wrong idea, this isn't going to be a series of reviews of the whole The Fast And The Furious franchise. I've already reviewed 2 Fast 2 Furious some time ago. I also already reviewed Hobbs And Shaw here. A number of other instalments in the series were reviewed when I was writing for Flickfeast. So I can always point you towards my thoughts on any specific title in the series that you may want to read my opinion on (if you're strange enough to ever want that), but there's still very little rhyme or reason to my review scheduling.

But on with this one anyway.

Moving away from featuring any of the characters that we'd seen in the first two movies, this third Fast And Furious film starts by introducing viewers to Sean Boswell (played by Lucas Black). Sean likes his car, and is a good racer. He also gets himself into trouble quite a lot. After his latest escapade, Sean ends up being given one last chance, which involves being sent to Tokyo to live with his father. It's not long until he takes a shine to Neela (Nathalie Kelley), befriends a young entrepreneur named Twinkie (Bow Wow), and attempts to make his name on the racing circuit. But the racing style is very different from any he has known before. It's all about drifting. Han (Sung Kang) takes a liking to Sean, and agrees to teach him how to drift while Sean runs errands for him. D. K. (Drift King, played by Brian Tee) really dislikes Sean, setting up tension that may just lead to things needing resolved with one major drift race before the end credits roll.

I used to view The Fast And The Furious: Tokyo Drift as the black sheep of the Fast And The Furious movies. It didn't really feel connected to the others, apart from a tenuous link at the very end, and the different racing style on display meant that it didn't have the simple engine-revving thrills of the other movies. But time has been kind to it, or I am just getting softer in my old age. I now view this as a solid entry in the series because of the way it manages to deliver the expected driving sequences while also doing things a bit differently.

The first in this series to be written by Chris Morgan, who would maintain a prime position with the series for the next half a dozen entries, and directed by Justin Lin, who would also direct the next three films, this is an energetic and fun film that perhaps relies a bit too much on the charm of a leading man who doesn't have the benefit of top-tier star power. Not that Black is bad (I really like him), he just isn't a fully-fledged star ready to fit into this kind of material.

Other than Black, who I will reiterate is very good (he just stands out when you compare him to the other main leads in these movies), Kang and Tee stand out for different reasons. Kang is effortlessly cool and charming, a great addition to the core cast of characters, while Tee is a worthy competitor/threat to our young hero. Kelley is nice enough, Bow Wow is good fun in his role, and there are fun cameos for Sonny Chiba and Keiichi Tsuchiya (AKA the Drift King).

The first main race sequence is a destructive blast, the next main race sequence is lively and fun, you get a montage or two to show the learning curve for how to drift, and the third act ramps up the danger while setting up the final race. It is, as these movies so often are, exactly what you want if you know how these things usually play out. It's also an interesting stepping stone in the storyline that weaves through most of The Fast And The Furious movies. 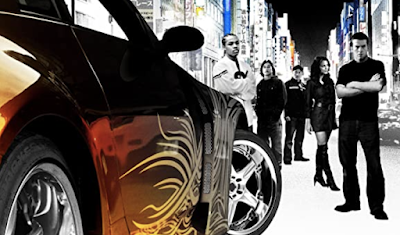