Adapting the play of the novel, written by Keith Waterhouse (who, along with Willis Hall, also developed the play and screenplay), Billy Liar is a film from director John Schlesinger that holds up as a near-classic. It mixes the dreary kitchen sink drama approach with the daydreams of a character not a million miles removed from Walter Mitty, and the end result is deliciously bittersweet.

Tom Courtenay (who was an understudy of Albert Finney in the stage play) is Billy Fisher, a young man who doesn't see any easy escape from his job and family. He lives at home with his mum (Mona Washbourne), dad (Wilfred Pickles), and grandmother (Ethel Griffies). And his job is in an undertaker's office. Maybe his many flights of fancy will keep him happy as he goes through his daily routines, or the fact that he has a number of women convinced that they are going to be the one he marries. Billy also wants to get a new job, writing for a famous comedian, and thinks he could make a better new life for himself in London. But that may be just as much of a pipe dream as everything else that goes through his head.

An easy film to watch and digest, Billy Liar can be enjoyed simply as a look at someone who cannot help but tell a lie whenever he has the opportunity. Many of us have known people like him, and his tales alternate between being amusing, especially when visualised in sequences that punctuate the standard dreariness of a normal day in the life of a man who feels he's being held back from something great, and being the cause of some distress for those around him. He's in a bit of trouble with his employer (played by Leonard Rossiter), he's exasperated his father, and he's almost certain to upset one of the women that he's dating.

But dig just under the surface and there's even more to chew over. That sense of being entitled to something better, is it the usual male ego or is it something that has grown and mutated through every daydream that Billy has ever had? And where can Billy escape to if he cannot escape himself, which may very well be the biggest hurdle for him to overcome? It's this dilemma that comes to the fore in the last reel of the film, taking a look at how committed people can be when they weigh up the reality around them against the prospects they have dreamed about for many years.

Courtenay is superb in the main role, just managing to be charming and childish enough to stop viewers from hating him for his antics. Washbourne, Pickles, and Griffies are also very good, tolerating (or not) Billy's behaviour in different ways. Gwendolyn Watts and Helen Fraser get to be two very different women romantically involved with a liar, and they both do well with the material, but the standout is Julie Christie, playing a third woman, Liz, who somehow understands Billy better than most. The two of them are similar, but different in at least one crucial way. Rossiter is as brilliant as ever in his role, and there are supporting turns from Rodney Bewes, George Innes, Finlay Currie, and a few others that you may or may not recognise.

This is a film that I meant to see many years ago. It has a reputation that precedes it, and rightly so. I'm glad that I finally got to it, and I can now join in with the chorus of voices recommending it to others. An essential piece of British cinema. 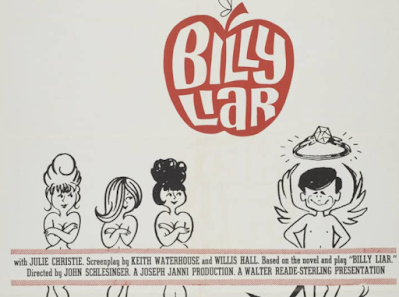