Based on a film that was based on a strange and enjoyable true story, Walking Tall is a good star vehicle for Dwayne Johnson (still billed here as “The Rock” while he grew into his movie stardom), even if it’s far from a perfect movie.

Johnson is Chris Vaughn, a man who returns home after years spent in the military. The mill has closed, his old friend (Neal McDonough) has bought up lots of businesses, and something stinks. Problems become obvious when Chris and his friends have a night out at the local casino, where he spies a game being rigged and drugs being sold. The cops aren’t interested, which leads Chris to nominate himself for the position of Sheriff.

Directed by Kevin Bray, the biggest surprise about this movie is that it took about three people to write the simple script. I guess the challenge was fitting the material around Johnson and his co-stars, because the template of the original tale doesn’t seem like it would need a lot of work. There are also very few scenes here that are on the level of dumb fun you would expect from this kind of thing.

Johnson does his thing though, and that makes up for a lot. He is a solid choice for the role, and easily convinces in any of the more physical sequences. McDonough is also very good as the slimy, polished, friend who has turned into quite the powerful businessman. Johnny Knoxville does his amusing sidekick thing, and is just fine, while Kevin Durand is the main henchman squaring off against Johnson during the first half of the movie. Ashley Scott is the required love interest, and cannot do anything to improve her thankless role, but John Beasley and Michael Bowen are enjoyable as, respectively, the father of our leading man and an ineffective cop. Other people flesh out the cast, and Khleo Thomas stands out as the young nephew, Pete, but the film focuses on Johnson and Knoxville doing what they can to battle the baddies.

Certainly not the worst film that Johnson has done, nor is it close to his best, Walking Tall will satisfy people after an easy ninety minutes of action (even if the editing is a bit messy) and general camaraderie between the main characters. 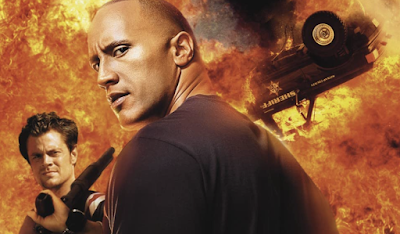