Although I didn't know anything about the production history of the movie when I first saw it, as a teenager seeking out every horror movie with a tantalising title and/or lurid video cover, Spookies has always been a film I viewed with a mix of affection and admiration. I knew it wasn't quite how movies should be, going by the standard criteria that many use to judge their viewing experiences, but I also knew that I kind of loved it.

It's a sign of the wonderful age we live in that Spookies now had a lovely blu-ray release, packaged with a documentary about the film and a documentary on VIPCO, the company who brought so many horror movies to VHS and DVD here in the UK, often butchered by the BBFC. It's worth noting that, for all the complaints to be made about VIPCO releases (murky prints, the many cuts to the material, etc), they were delivering this kind of content to horror fans years before we had the wonderful variety of boutique labels we have now. It may be difficult to limit your purchases now, with the likes of Arrow, Indicator, Second Sight, 101 Films, and others vying for your money, but 20-30 years ago we mainly had to rely on the curating skills of VIPCO and Anchor Bay.

But back to the film. There's an elderly man (Felix Ward) waiting beside a beautiful woman (Maria Pachukas) he seems to be in love with. They're hidden away somewhere in an old house that is visited by a mixed group of people we will call "People Obviously Set To Imminently Expire" AKA POSTIE. What's more, this group includes a Man With A Hand-puppet AKA MWAH. I think that tells you everything you need to know. As is so often the case, the POSTIE group decide to play around with a spirit board. That leads to encounters with the undead, including demonic creatures, a statue of the grim reaper that doesn't want to stay still, an arachno-beastie, and, rather infamously, some farting mudmen.

The things that are bad here are things that are bad in a lot of small horror movies. The acting isn't great, especially any scene featuring MWAH, the script gives people some laughably bad dialogue, and there's a lack of any sense of logic or consistency. The fact that the film was so severely recut and reworked explains that last aspect, but the air of surreal insanity it creates also ends up being a big plus point for the film. You can accuse Spookies of many things, but you certainly couldn't accuse it of being boring.

Eugenie Joseph is the director to have finished it off, and Ann Burgund helped to write the extra material used, but equal credit must go to Thomas Doran, Brendan Faulkner, and Frank M. Farel, the people who created "Twisted Souls", the film that was mistreated and transformed into Spookies.

My love for this film isn't fully in line with what you get onscreen, but I cannot bring myself to let the bad outweigh the good. The cast at least do what is asked of them, even MWAH, but they're playing second fiddle to the wild and varied special effects on display, with lots of pulsating bladders being used and an ill-advised amount of blue paint to create a number of unthreatening ghouls.

Not a film I would hastily recommend to everyone, but one I would hastily recommend to those who spent the same amount of hours as I did browsing the many horror movie video boxes that often specialised in misrepresenting the actual content of the films contained within them, Spookies may well be one of the best films to come from such a bad experience. It's cheesy, laughable, often incoherent, and full of moments lifted from elsewhere. It's also pretty bloody brilliant. 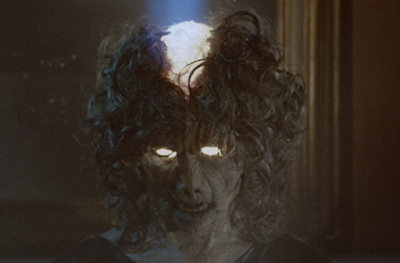