I have said this many times before, and will keep saying it until the end of my days. The people who tell you that “school gives you the best years of your life” are full of shit. They had a lovely time, obviously, and were fortunate enough to fit in and be popular during the crucial years of development in an environment that treats a lack of confidence, and/or a sense of being different from everyone else, like a drop of blood in a tank full of piranha.

Anna Odell, artists and film-maker, knows this. You could, quite rightly, say that the best thing to do is to shake off the stench of those horrible memories and win the war, after so many lost battles, by doing well and being happy in your adult life. But what about those who behaved so deplorably? Saying “oh, they were just kids” isn’t good enough. It is as harmful a way to continually perpetuate bad behaviour as the awful “boys will be boys” mantra. Because we were all kids, roughly of the same age. And not everyone decided to be a bully to others. Not everyone joined in with the mockery, or caved in to the peer pressure. And that is tough, especially when peer pressure could crush you like a huge boulder.

But back to Odell. Having not received an invite to her school reunion, Odell decides to make a movie about what could have happened, had she been there and decided to call people out on their behaviour from decades ago. She then calls up her ex-school”mates” and tries to show them the film, trying to get their side of the story. The Reunion is the film interpretation of that real experience, including the adults having a chance to talk and consider why their own recollections don’t match up with the recollections of those who suffered at their hands, and I was on the side of Odell for the entire runtime.

Uncomfortable and confrontational, Odell has created something that should actually be required viewing in most schools. It’s amazing that we’re where we are today and this remains a daily issue. Nobody realises how bad it gets. Why? Simple, bullied kids don’t want to tell adults (because there’s nothing that makes your bullying worse than going to an adult who tries to sort it out as adults would . . . it doesn’t work that way). And bullies either hide it well from their parents and other grown-ups, or simply repeat behaviour taught to them by parents who never really matured beyond their high school level.

This is the first movie, art piece, I have seen from Odell. It definitely won’t be my last. She’s instantly become a bit of a hero of mine, and I am sure a lot of other people will feel the same, especially if they didn’t enjoy their high school years. 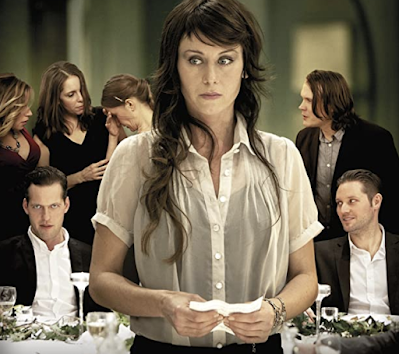 Email ThisBlogThis!Share to TwitterShare to FacebookShare to Pinterest
Labels: anna odell, the reunion