Written and directed by Steven Kostanski, a part of the hugely talented Astron-6 company, Psycho Goreman is the best film I have seen in years when it comes to nailing the tone and sheer sense of fun we used to find throughout many silly sci-fi horrors of the 1980s. It also has buckets of blood and guts thrown around every main sequence, so fans of practical effects should have a field day with it.

Mimi (Nita-Josee Hanna) finds a gem that leads to the freedom of an imprisoned being of darkness, pain, and death. But it also controls him. This leaves Mimi in charge of a creature, now named Psycho Goreman AKA PG (played by Matthew Ninaber, voiced by Steven Vlahos), that could destroy her entire planet. Others are out to kill Psycho Goreman, but he soon reluctantly starts to warm to Mimi, her brother (Luke, played by Owen Myre), and some others who learn of his existence.

There are a few things that work here to make Psycho Goreman as good as it can be. First of all, the script and direction by Kostanski get things absolutely perfect throughout. You get an opening crawl to set the scene, there's a montage or two, a number of lines and moments are side-splittingly funny, and there's even a rap song over the end credits that pretty much narrates the entire film you just watched. Yep, this is a film that will make you think you just came back from the video shop with something that actually lives up to the cover art.

Secondly, the performances are all wonderful. Hanna plays a little girl who also happens to be deliciously carefree about people living and dying, a pint-sized psycho herself, and Myre is suitably nervous throughout, because of his sister and then PG. The physical performances from people disguised under a large amount of prosthetics deserve a good amount of praise, with Ninaber and Kristen MacCulloch (as Pandora, a visitor looking to finish PG off, once and for all) having a much bigger share of the screentime than any of the other supporting players. And you have Adam Brooks and Alexis Kara Hancey enjoying themselves as a pair of concerned parents who then simply return to arguing with one another as their strained relationship comes back into focus.

The music fits, the visual style is perfect, this just all blends together to deliver something I'd actually label as perfect, for what it is. So many films have come along in the past decade or so that people have told me were a throwback to fun flicks of the '80s, and none of them have got it just right (the best have all come from Kostanski and co. though). Psycho Goreman gets it right. I can't wait to rewatch it already. I may just listen to that fun rap song again, in the meantime. 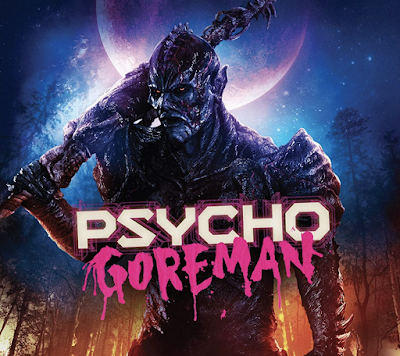