Despite being directed by Michael Bay, The Rock comes oh so close to being a perfect modern action movie. SO close. In fact, I'd go as far as saying that it's only a horribly-edited car chase sequence that drags it down. Everything else, from the predictable moments of cheese to the interplay between the leads, is absolutely spot on.

A group of soldiers, led by General Francis Hummel (Ed Harris), steal some very nasty chemical weapons and take over Alcatraz. They have a number of citizens held hostage and are threatening to send some guided missiles to give many of the people of San Francisco an instant death sentence. The people in charge need to send in some Navy SEALS, led by Commander Anderson (Michael Biehn), but that team needs to be accompanied by a chemical weapons expert, Stanley Goodspeed (Nicolas Cage), and John Mason (Sean Connery). Mason is the only person to have ever escaped from Alcatraz. In fact, he is pretty good at escape, which is why the main government representative is wary of getting him to help out. Mason was alleged to have stolen a microfilm just chock full of many dark and dirty secrets decades ago, and he's been held without trial ever since. Maybe revisiting Alcatraz will help him to become a free man once more.

You may not have thought so from the first sentence, but I tend to enjoy the movies of Michael Bay. They're absolutely fine when you're in the mood for some slick, bombastic, action. But they are rarely truly great. The Rock is truly great, and that is often despite the usual style of Bay being stamped all over it. It’s great because of the characters scattered throughout the groups of heroes and villains, and great because of a script, by David Weisner, Douglas Cook, and Mark Rosner, that makes things more morally shaded and complex than most of these action blockbusters. Ed Harris gets to play arguably the most interesting and ambiguous “villain” of the nineties, and he is just one essential part of the puzzle.

Cage is fun in his role, playing someone who steps up to do what needs done, despite being way out of his depth. Connery is perfect, an old survivor who has retained skills that make him a great ally or dangerous enemy. And Harris holds your attention completely every time he’s onscreen. The supporting cast also includes fantastic performances from John Spencer, William Forsythe, Michael Biehn, Tony Todd, David Morse, and many other familiar faces, all making the most of their screentime. Vanessa Marcil isn’t given much to do, she is “the girlfriend” who helps Cage to explain his personal investment in stopping those rockets being launched.

There’s a superb score, mainly from Hans Zimmer, some great fights that mix fun choreography and moments of brutality, and every interaction between Cage and Connery is gold. You cannot do much better than this if you want a fun action movie to fill a couple of hours during a Saturday evening. Almost an outright modern classic. 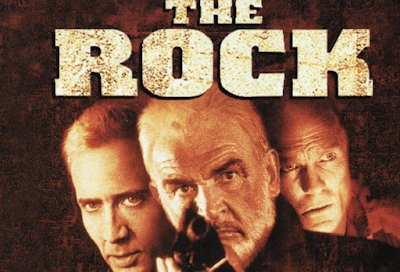