Everyone knows that you shouldn't wear ancient masks containing huge power, especially if their mythology is known to scholars and people searching for the thing. Just ask Jim Carrey. The mask in Skull: The Mask does a lot more than turn your face green and amplify your inner character. It turns the wearer into a relentless, and seemingly unstoppable, killer.

The start of the movie shows the mask being moved, and things end in a strange, and very bloody, crime scene. It then really kicks into gear when someone cleaning up the crime scene (Rurik Jr) is taken over by the mask, sending him on a path of death. Meanwhile, a woman named Beatriz (Natallia Rodrigues) ends up tracking the item, which intertwines her fate with that of an interested party named Tack (Ivo Müller).

People often dismiss horror fans, claiming they are easily pleased by some of the worst that cinema has to offer. Alright, sometimes that is true (after all, if a film has nothing else going for it then I have often held out hope for some extreme gore or gratuitous nudity to at least help make it watchable), but we're also often a discerning bunch of cineastes. Those who dive much deeper into the genre than just the biggest mainstream releases tend to have explored a lot of older films, and many world cinema titles. But that doesn't stop us from sitting back and being entertained by something that aims to provide some simple entertainment. And it's hard to think of a horror sub-genre more designed for simple entertainment than the slasher movies. Which is why I'm surprised that I didn't enjoy Skull: The Mask more.

In essence, it has so many elements I should love. It's a slasher, and not a bloodless one. It adds a decent backstory for the killing, without letting that detract too often from some of the carnage. And the visual design of the main killer is pretty great. Sadly, it never really makes the best use of the central idea, and none of the supporting characters are really worth rooting for, considering most of their motivation.

The cast all do well enough, but nobody stands out. Rodrigues is certainly a good presence, but everyone is overshadowed by the hulking menace portrayed by Rurik Jr. I'll also mention Ricardo Gelli, a priest who gets to have a great battle with the killer at one point.

Written and directed by Armando Fonseca, ably assisted by Kapel Furman, this is a film that feels like a debut feature, even though it isn't one. Neither man makes a firm decision to lean into any one direction with the material, which means you get the various strands feeling a bit disconnected until the inevitable bringing together of characters in time for the grand finale.

There's some fun to be had here, and some subtext that you may find interesting, but other people seem to have enjoyed this much more than I did. I felt it just did enough to drag itself above average, but no more. Ah well, I can always go back to singing along to "Cuban Pete". 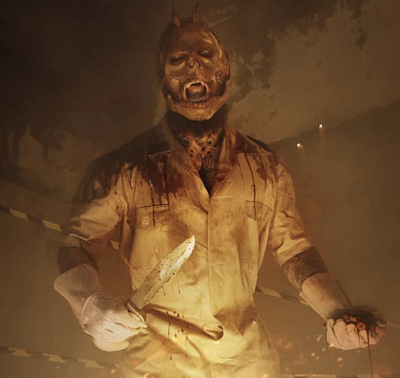