We have seen all of this before, for the most part. Writer-director Paul Schrader doesn’t mind that. He wants viewers to remember what they have seen before. Because this is a film that takes you through a lot of familiar places on the way to a slightly unexpected destination.

Oscar Isaac plays someone who goes by the name of William Tell. He served a lengthy sentence in prison, for something that will be revealed later on. Prison is where he learned to count cards, he became a master of blackjack. He’s also a pretty dab hand at poker. That makes him of interest to La Linda (Tiffany Haddish), a woman who gets great poker players bankrolled to play at the tables with higher stakes. William isn’t really interested in playing poker for a lot of money though, but finds his opinion subject to change when he meets young Cirk (Tye Sheridan). Cirk knows something about William’s past, and wants the two of them to pay a visit to another important figure from their past, Gordo (Willem Dafoe). Cirk doesn’t really know the cards that are being dealt, however, while William knows exactly how things will play out.

Very typical of Schrader’s work, The Card Counter is a solid character piece that ultimately just doesn’t do quite enough in the first two thirds of the runtime to make it all worthwhile once you know where things are going in the third act. The four main cast members, and it is worth noting that Dafoe is onscreen for only a minute or two of screentime, all work well, separately and together, and the leisurely pacing allows them to hold your attention and deliver some stellar work.

You could argue that the performances are better than the material, which wouldn’t be entirely unfair, but both ultimately work to elevate one another. Isaac gives one of his best performances, a dead soul with one huge talent (but he’s far from lifeless), and I definitely would not want to see him across from me during a poker game, whether he has been helped by props onscreen or has learned the card skills. Sheridan is excellent alongside him, a young man with a desire for revenge that he doesn’t realise could take him down a dead end road. Then you have Haddish, also giving one of the best performances of her career so far. Her character is the perfect mix of cynicism and optimism, and she shows how obviously she is drawn to Isaac’s character. Dafoe is right for his role, even if it’s a shame to see him so underused, and he does well.

Perhaps Schrader wanted to challenge viewers by delivering something so full of things we’ve seen so often before, or perhaps he wanted to use the familiarity to help pull the rug out during the third act. Whatever his reasoning, it doesn’t quite work as well as he hopes. That’s because he doesn’t add anything else to the mix, in terms of style or truly memorable dialogue. He still gets enough right to make this a worthy film though, helped immensely by the cast.

Maybe not a full house, this remains a gripping and intriguing tale of past sins, prison life, and poker tactics. 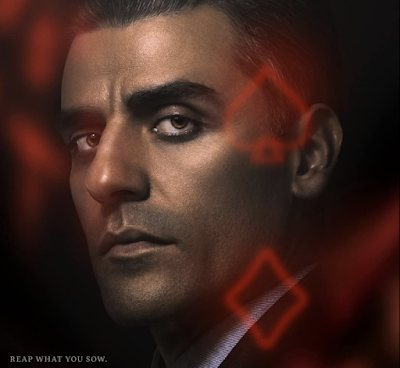