A sci-fi horror movie that blends vampirism with the experience of being indoctrinated into a cult, Thirst is an interesting oddity that certainly tries to do something a bit different when it comes to the main archetype it deals with. While not entirely successful, especially throughout the first half, it's definitely one that I recommend fans of this subgenre check out.

Chantal Contouri plays Kate Davis, a young woman who is kidnapped by The Brotherhood. They believe her to be a descendant of Elizabeth Bathory, which means she should be an important figure in their organisation. What The Brotherhood does is quite simple, they harvest blood from a number of victims held in an area that is part laboratory and part prison. Drinking the blood should, as far as they are concerned, help them stay youthful and strong. Kate wants no part of the horror that she sees around her, which means it is time to start breaking down her defences with the use of hallucinogenic drugs, a method objected to by Dr. Fraser (David Hemmings). As the movie plays out, Kate becomes more and more unsure of her own mind, and it seems like just a matter of time until she will start drinking blood herself.

The feature debut from director Rod Hardy, and the only feature script written by John Pinkney, Thirst may be a film to be admired more for its ambition than the execution of the material, but that ambition keeps it a few steps ahead of so many other vampire movies you may enjoy from the '70s and '80s. Although the two may seem far apart, this would make a decent double-bill with the entertaining madness of Zardoz, especially considering the different aspects of potential eternal life being explored.

Contouri isn't a strong lead, but she's not terrible. Perhaps this is due to the script she is working with, considering the fact that she gets a bit stronger when things start to pick up in the second half. Hemmings is his usual enjoyable presence, and you also get a sense of menace provided by Henry Silva and Shirley Cameron, although the former simply exudes menace whether his character is written that way or not. Rod Mulliner is the other main player, a man named Derek who Kate is attached to, and he does perfectly fine work in his role.

The biggest flaw that Thirst has is the fact that it actually doesn't ever go as far as it could. Whether due to budgetary constraints or a lack of vision, or both, this would have been a better film if it had packed in some more scenes that allowed The Brotherhood to look like a much bigger, and perhaps more dangerous, place. This is horror sci-fi that is a bit light on both (the horror is not horrific enough, despite the implications, and the sci-fi isn't extrapolated further), but it still manages to overcome the obvious flaws thanks to the strength of that intriguing third act.

I would tentatively recommend this, especially to anyone who knows the vampire movie subgenre can encompass films as varied as The Lost Boys, Martin, Lips Of Blood, and The Addiction. You might, as I did, end up appreciating this one more than casual "fang-bangers". 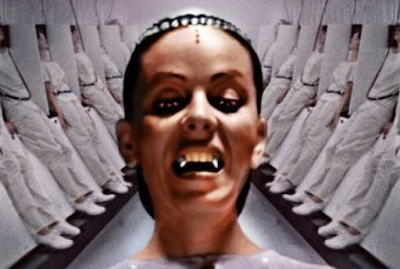