With a title that translates to Good Time Girls, and a number of moments in the opening act that show typical happy-go-lucky "swinging '60s" shenanigans, French style, you could be forgiven for thinking that Les Bonne Femmes is nothing more than a bit of entertaining fluff. Nothing too heavy. There's a bit more to this though, a melancholy and darkness that grows on the way to the finale.

There are four women being shown here. Jane (Bernadette Lafont) seems to have quite an easy life, and no shortage of admirers. Ginette (Stéphane Audran) is becoming more and more fed up with her day job, and looks forward to the evenings when she can do what she loves, performing on stage. Rita (Lucille Saint-Simon) may be heading towards happiness with her fiancé, but it's quite obvious that he doesn't really value her personality, and he certainly views her as being much less intelligent. And then there's Jacqueline (Clotilde Joano), a woman being stalked before stalking was properly defined (I guess). Jacqueline comes to quite like the man who follows her around, but that doesn't seem like a way to find love and happiness.

An early film in the directorial career of Claude Chabrol, and written by Paul Gégauff, this feels like a strange mix of the progressive and the traditionally moralistic, perhaps due to the fact that Parisian women at that time would experience the same mix of attitudes in their everyday life. Hell, women still experience it nowadays. There's a sense of the camera being a detached, and impassive, observer while the people who surround the four female characters underestimate, dismiss, or covet them.

Things seem to happen all at once or not at all, once again perfectly portraying the experiences of these women. Time can drag while they get through their work day, but it all starts to run out so fast when they're enjoying their free time. The action can get a bit frantic at times, but it's never incoherent.

Lafont, Joano, Audran, and Saint-Simon are all pretty great in their roles, with their similarities as easily defined as their differences. Saint-Simon is my personal favourite, but they all do well in presenting themselves as natural and believable women trying to simply find their ultimate happiness, in whatever form that might take. As for the other characters, most of them are men helping to show why they're probably not the prize for any of the women. All of the acting is fine, it's just depressing to see the many different ways in which these males fail to consider women as anything more than desirable accessories (something that also, sadly, happens too often nowadays).

Although it may feel a bit piecemeal to some viewers, Les Bonne Femmes is a fantastic piece of work, important for the time in which it was made and no less impressive nowadays. It may be over 60 years old, but it feels as if it could have been made in the last few years. That's good for film fans, although it's not quite so good for anyone who might be thinking we have progressed much, as a society seeking equal standards between the sexes, over the past half century or so. 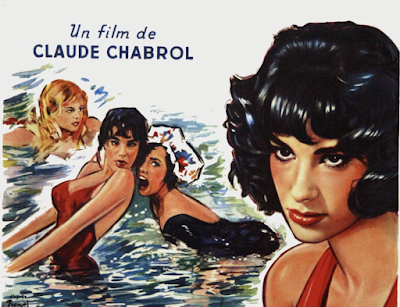