Burt Lancaster plays Steve Thompson in this excellent, and simple, film (one of a few cracking noirs that Lancaster starred in during this period in his career). Thompson has just arrived back in his home city, and it doesn’t take him long to once again notice his lovely ex-wife, Anna (Yvonne De Carlo). Anna doesn’t mind reconnecting with Steve, but that doesn’t stop her from staying married to a gangster named Slim Dundee (Dan Duryea). Knowing what they need to start life afresh, Steve comes up with a plan to grab a big payday from his armoured-truck driving job. It’s a plan that wouldn’t be at all possible without having an inside man to help.

Based on the novel by Don Tracy, Criss Cross is a brisk and slick noir that makes up for the lack of memorable dialogue and twists with excellent shorthand used throughout and an ending that continues to hurtle along with a constant air of fatalism.

Writer Daniel Fuchs may not be a household name, but he has some great little movies in his filmography (at least check out this one and Panic In The Streets, which he helped to adapt, although the screenplay credit goes to Richard Murphy). Director Robert Siodmak has a similar selection of quality dotted throughout his career, making him a good pairing with Fuchs. He knows what is required when it comes to technique and style, not bothering with anything that detracts from the characters all either being all ready to fight or fornicate with each other.

Lancaster was great at being the unfortunate, handsome “lunk”, and this is another great role for him. It may not have the complexity of his best roles, but he was a superb presence in the film noirs that had him front and centre. De Carlo is, as necessary for this kind of thing, beautiful and potentially very dangerous. The writing could have done more to give her a personality complementing her looks, but it is still easy to believe that she could have quite an effect on any man who falls hard for her. Duryea had the easiest role, but he remains a suitably menacing presence for most of the runtime, even when he isn’t onscreen, and that proves how well he does with his performance.

A wide variety of film types can be found under the umbrella of film noir, and that allows for viewers to pick their poison depending on their mood at the time. This may not be as intricate or nuanced as some, and it may lack some truly standout moments, but it might also perfectly hit the spot when you want something simple, entertaining, and deceptively light up until the last few scenes. It’s one I would happily revisit any time. 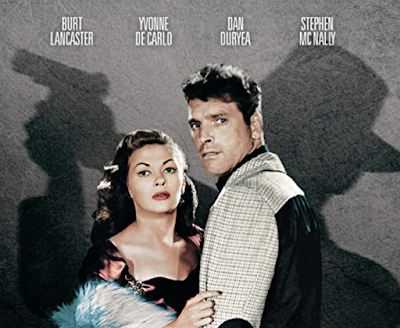