Based on a novel by Kenneth Fearing, and with a screenplay mainly credited to Jonathan Latimer, The Big Clock is a superb classic noir that also has a lightness of touch to give it a greater sense of fun than most of the other films it could sit alongside.

Ray Milland is George Stroud, the hero of the piece. He works for a crime magazine, and he's long overdue a holiday with his wife, Georgette (Maureen O'Sullivan). Unfortunately, he also works for a very demanding and ungrateful boss (Earl Janoth, played by Charles Laughton). After another very bad day at the office, so to speak, George ends up on a drunken evening out with Pauline York (Rita Johnson). Pauline is an on-off girlfriend of Earl, and she thinks that she and George can team up to effectively spite him. That's not about to happen, however, as Pauline winds up dead, and George is tasked with trying to find the perpetrator for a scoop. He isn't told who the victim is, which leads to him unwittingly getting his team to look for a mystery prime suspect who starts to feel VERY familiar.

Although it has that aforementioned lightness of touch, don't go thinking that The Big Clock doesn't keep winding up the tension as events unfold. It is, to use the overused phrase, a coiled spring throughout most of the middle section. Things look bleak for George, despite the fact that he should be able to have the truth on his side. Director John Farrow makes great use of his cast, using them to lift the material (not that the script is terrible, not at all) with how well they all interact with one another, and he ensures that the plotting stays simple and clear throughout. Things may be a bit contrived in the first half of the movie, but it is so enjoyable that it doesn’t feel problematic.

Milland is a dependable lead, good at being the kind of everyman you want in this role. Johnson makes a strong impression with her few main scenes, allowed to have a lot more fun than O’Sullivan, who has to do little more than be the loyal and supportive wife throughout. Laughton is a great antagonist, working through a plan that is formulated by a conniving character also employed by him (played by George Macready), and you also get a performance from Elsa Lanchester that allows her to steal any scene she is in.

Although some may prefer their film noirs to have more darkness and grit, dismissing The Big Clock would be a big mistake. It’a a hugely entertaining thriller that only just misses out on being a minor classic. And I am now even more interested to check out one of the main remakes it had, No Way Out (1987). 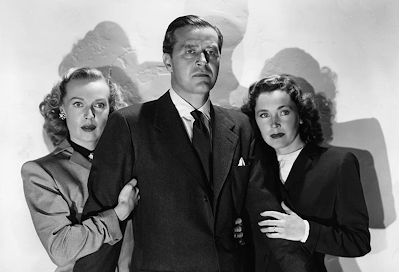