It’s something we have seen happen in movies before, the businessman with a busy schedule who offers to pay a driver for a whole night of work. All the driver has to do is get the passenger to various places on time, wait, and receive a nice bonus at the end of his shift. This particular businessman is Vince (Tom Cruise), and the taxi driver is a man named Max (Jamie Foxx). Vince has five jobs to do, but Max becomes alarmed after the first job, when a dead body falls on his taxi. That’s when he finds out that Vince is a hitman.

Directed by Michael Mann, and written by Stuart Beattie, Collateral is best described as, to use the technical term, an absolute beast of a film. Set mainly during one night in Los Angeles, it’s a two-hander that makes the most of two fantastic leads delivering performances up there with their best work.

It also makes the most of L.A. Mann gets the right people working with him to put his vision onscreen in the way that best showcases his eye for cityscapes, and how human animals move around them when being pursued, or even trapped. This is a gorgeous and glossy film, and it manages to avoid claustrophobia, even when a number of scenes simply show Vince and Max talking while the cab is driving around. Mann doesn’t put a foot wrong, and when the action beats hit, well, he once again does what he seems to do best. The nightclub scene in this film holds up as a flawless bit of entertaining violence, a precursor to the visceral thrills of the John Wick movies.

Sporting an uncharacteristic grey head of hair, Cruise is perfectly fast as the cool, calculating killer who lives by his own moral code. He’s a terminator, but one affected by elements of the human condition. Foxx is just the right mix of comfortable chat, nerves, and quick thinking as he gets drawn deeper and deeper into a nightmare scenario. Around the two leads, you get one hell of a supporting cast all giving great performances. Mark Ruffalo and Peter Berg are two cops trying to figure out what is going on, Jada Pinkett Smith is a lawyer who stands out as Max’s favourite client of the shift, and there are a number of familiar faces elsewhere, from Barry Shabaka Henley to Bruce McGill, Javier Bardem to the briefest turn from Jason Statham.

Maybe not as successful as it wants to be when really trying to push the urban jungle and predator/prey analogies, Collateral does everything else pretty much perfectly. From the pacing to the soundtrack, the set-pieces to the foreshadowed final moments, this is gripping, very cool, and arguably the most fun film that Mann has delivered within this subgenre. 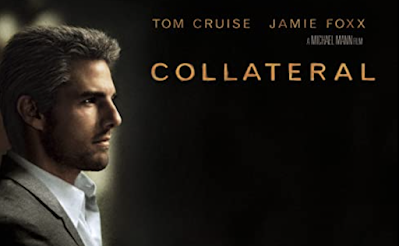