The idea of taking a job with some strange caveat attached to it is a common one in many movies, be they comedy, drama, or horror. It's most effective when used in horror though, in my opinion. People very much in need of money tend to ask less questions, whether or not they really want to. The room you're not to ever step inside, the item that is never to be touched, people who aren't to be spoken to, etc, etc.

Caveat is all about a man, Isaac (Jonathan French), who is offered some decent cash to simply stay in a house and keep an eye on a troubled young woman, Olga (Leila Sykes). The man hiring him, Moe (Ben Caplan), makes it all seem like easy money. Then Isaac finds out that the house sits alone on an isolated island, and he is asked to wear a restraining harness that will limit his movements in the house. This is to allay Olga's fears that someone will enter her room while she is sleeping. Obviously reluctant to put on the harness, Isaac is eventually persuaded to stay. It may be odd, but it should still be easy money. Then things start to get a bit spooky.

A superb feature debut from writer-director Damian Mc Carthy (who has also delivered a number of brilliant shorts, and I have enjoyed three of those: Hatch, He Dies At The End, and Hungry Hickory), Caveat is a psychological horror film that builds up a lot of traditional scares while unfolding a story that reveals a number of solid twists and turns. Shot in a way that shows the grimy environment as something akin to a warm world of sepia, and that cinematography is courtesy of Kieran Fitzgerald, it also highlights the importance of sound, with the music by Richard G. Mitchell complemented perfectly by every creak and rustle, and any other noise, that can put viewers on edge.

French does well in the main role, despite struggling to get over the main hurdle that the script has, convincingly taking on such a strange role. He's placed in a very vulnerable situation, but also benefits from the memory loss that his character has, making him an ambiguous figure as some main developments come to light. Sykes, who shares most of her screentime with French, is excellent. Her role could have easily been too unbalanced and twitchy, considering how her disturbed her character is supposed to be, but she gets to show that she's perhaps not actually as she has been described by others. She's traumatised. Caplan isn't onscreen as much, but he's very good in his role, just seeming ever so slightly untrustworthy from his first appearance (but without viewers knowing if there's any reason to view him that way, other than the strange job he is offering).

It may seem a bit of a stretch when things are clarified in the third act, there are one or two contrivances needed to maintain the tension as we head towards the end of the journey, but Mc Carthy sets everything up really well, and the talented cast are guided well by a script that works hard to keep everything plausible. More importantly, Caveat delivers some great scares, with the easier jump scares sprinkled throughout a film that proves constantly unnerving and tense.

This is highly recommended, and I cannot wait to see what Mc Carthy does next. Because he hasn't really put a foot wrong yet, from what I have seen of his work. 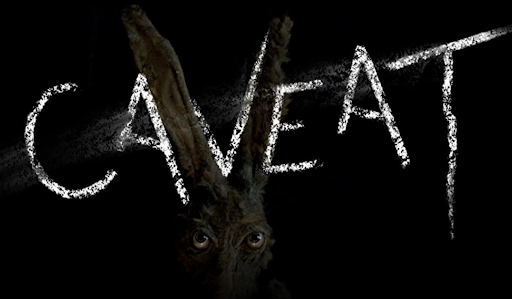