The opening scene is one of those forgotten elements. It’s a sex scene that ends with a brutal death, which is memorable enough, but the sheer intensity and unflinching look at the carnage prepares viewers for a very different type of film. That la petite mort, or maybe we should call it le grande mort, is the event that leads to the introduction of two cops, Nick Curran (Michael Douglas) and Gus Moran (George Dzundza), and those two cops soon end up questioning a main suspect Catherine Tramell (Sharon Stone). It turns out that Tramell is a successful author, and a murder depicted in one of her books was carried out in almost exactly the same way as the murder now under investigation. Tramell seems drawn to Curran, who has a fiery and addictive personality, which is why he has been treated by Dr. Beth Garner (Jeanne Tripplehorn), who is also his occasional sexual partner. The mind games begin, and don't ever really stop, and the corpses eventually start to pile up as Curran and Tramell enjoy a fiery liaison that shows they could bring out the best and worst in one another.

Written by Joe Eszterhas and directed by Paul Verhoeven, there's nothing here that should work as well as it does. It's all a messy blend of clichés and ridiculous, but cine-cool, dialogue, with Verhoeven displaying his usual consideration for levels of taste and subtlety. Despite the big names and the polish, this is pure trash, but in all the right ways. And it's self-aware, playing out very much like some late night TV show about a grizzled detective, but with added bloodshed and sweaty sex scenes.

Douglas has never been afraid to play flawed men/anti-heroes/villains, and he does another great job here, portraying someone who can no longer run fast enough to stay ahead of the problems caused by his addictive personality (be it drugs, sex, or just visceral thrills). He's also happy to take on a role of someone potentially being played like a fiddle, and he's basically a strong supporting player in a film that showcases Stone at her best. She's sexy, smart, strong, and definitely has a hint of danger about her. The film made her reputation, and with good reason. It's hard to imagine anyone else taking on the role and doing it so well, although I can easily imagine some getting it horribly wrong. Tripplehorn has arguably the most thankless of the main roles, but she does well with what she's given, Dzundza plays a character so obviously due to reach a certain major plot point that he may as well be in a parody, and you have a cast further fleshed out by the likes of Denis Arndt, Leilani Sarelle, Chelzie Ross, Daniel von Bargen, Wayne Knight, Stephen Tobolowsky, Mitch Pileggi, and Dorothy Malone. Whether their roles are big or small, everyone works well enough with the material, and they're all guided by a director who is, as is so often the case, confident in his way of approaching the material.

There's more to highlight here, from the Jan de Bont cinematography to that lush Jerry Goldsmith score, and dismissing Basic Instinct as glossy smut does a major disservice to just how nicely it manages to maintain such an unusual intensity throughout, barrelling along from one hedonistic pleasure to the next as things build and build to what may be best described as an expectedly messy climax. 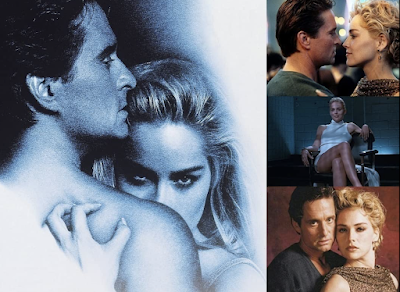