Director Joe Carnahan, who co-wrote this with Kurt McLeod, likes a certain kind of movie. They usually feature macho males. There’s a lot of violence. There’s plenty of dark humour. And he isn’t afraid to wallow in the classic crime movie tropes we have seen hundreds of times before. Copshop is absolutely in line with so many of his other movies, yet it somehow lacks that Carnahan touch that have made his other movies so enjoyable.

Alexis Louder plays a law enforcement officer named Valerie Young, about to have a busy night at her police station thanks to some guy who hit her during a call to a disturbance. That guy is Teddy Murretto (Frank Grillo), and he has had himself arrested deliberately, thinking a cell will be the safest place for him. Because there’s a price on his head. Some time later, Bob Viddick (Gerard Butler) is placed in a cell, caught in a flagrant DUI incident. But Bob isn’t actually drunk. He is there for Teddy. As if that wasn’t problematic enough for everyone in the station, Anthony Lamb (Toby Huss) is also after Teddy. And Anthony Lamb isn’t bothered by the idea of killing anyone else who might get in his way. Caught up in this crazy scenario, Valerie has to decide who she can count on to help her survive the night.

The character of Valerie may be the lead here, but the main pull is Butler, a killer with a moral code. He is the one you end up rooting for, because Teddy seems to be a scumbag who has run away from his responsibilities and Anthony Lamb is an absolute (hilarious) psycho. I think that’s the problem though, the fact that the film doesn’t decide to stick alongside Butler’s character from start to finish. That was the obvious through line, but we get a lot of set-up in the first act and too many scenes lacking his charisma and energy.

Louder is fine in her role, delivering dialogue and moments that foreshadow what viewers can sense coming along in the third act. She’s easy to like, and easy to root for. Her biggest problem is just the fact that she isn’t Butler, who swaggers through every scene that he steals. Grillo is stuck playing someone who is too difficult to like or trust, so it’s not one of his best roles. Huss, on the other hand, raises things up when his character crashes into the film and starts killing off everyone else around him.

Carnahan usually does well by reworking classic movie moments within his stylish and self-aware brand of cheery nihilism, but it doesn’t work as well here. The action beats aren’t as satisfying, the dialogue isn’t as clever as it should be, and the whole thing fizzles when it should spark and crackle. With a different cast this would have been almost unwatchable. As it is, it’s one that you can convince yourself was worth a chunk of your evening, even as you try to swallow and destroy that small, heavy ball of disappointment that settles in your stomach.

It’s sadly just not much cop. 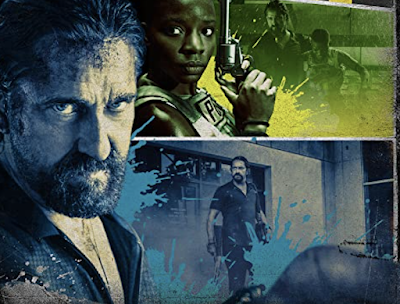