After making one hell of an impact with his directorial debut, Hedwig And The Angry Inch (a gloriously twisted and audacious musical), John Cameron Mitchell decided to push things much further with his second feature, Shortbus. If you're not sure whether or not this film is for you then the first 5-10 minutes should help you make up your mind. It includes some domination, someone urinating while sitting in a bath, a couple engaging in a variety of sexual positions, and a young man attempting to self-fellatio. Things get much more graphic throughout the rest of the runtime.

Sook-Yin Lee plays a relationship counselor, Sofia, who has some relationship problems of her own. She has never been able to achieve orgasm, despite trying very hard with her partner, Rob (Raphael Barker). She ends up trying to help Jamie (PJ DeBoy) and James (Paul Dawson), with the latter unable to relax enough to let his partner have penetrative sex with him, but that doesn't go too well, then leading to all of the characters spending time together in the hedonistic and liberating environment known as Shortbus. There is all manner of ways to explore your sexuality there, and Sofia also thinks she could make some more progress when she starts talking to a dominatrix (Severin, played by Lindsay Beamish). All of these characters are people that viewers already saw during the opening scenes, but there are more people to be added into the mix as various plot strands play out, intertwine, and continue to wind their way back to the dark and sweaty body-melding environment known as Shortbus.

Very graphic throughout, and Mitchell has stated that he sees no reason to use sex onscreen as he would use any other tool from his box of tricks, Shortbus will certainly cause the prudish to have palpatations for every minute that they try to endure. A lot of the sex scenes explore homosexuality and various kinks, from the s/d dynamic to self-pleasure, from voyeurism to group sex, and ,while it may seem overdone and gratuitous, the identity of the film is made up of these various acts. It's a collage of intertwined limbs and sexual organs, focusing on characters who are driven to distraction by their own sexual problems.

An interesting step along from his feature debut, Mitchell definitely sets himself out as someone happy to explore all aspects of sexuality with a non-judging and unflinching approach. The material deserves that, and there still aren't enough people delivering these stories in this way, but I personally preferred the stylistic and tonal decisions made in Hedwig And The Angry Inch. There's no problem with that, and it just means that I wasn't the target audience here. But I wasn't necessarily the target audience for his debut feature either, yet that one managed to win me over within a very short space of time.

I appreciate what was done here, and the whole things has an easygoing vibe that you would feel if you yourself were wandering into Shortbus, but it ultimately didn't really do enough with the script and cast to make the journey feel as worthwhile as I hoped it would be. 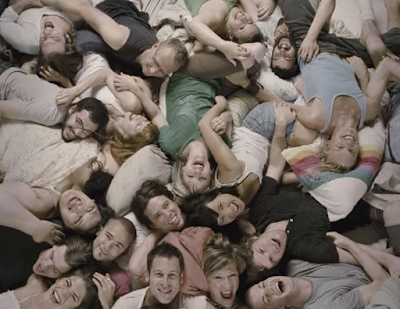