A film most notable for having the first appearance of the Dead End Kids (who would reach their peak, in my view, just one year later with their work in the classic Angels With Dirty Faces), Dead End is an enjoyable development of a play by Sidney Kingsley. Director William Wyler, and writer Lillian Hellman, manage to keep things tightly focused on the characters and the main issues being explored, class and the opportunities available to those in different parts of society, without it constantly feeling like something that could easily play out on a stage.

The plot allows plenty of time spent with the Dead End Kids, all of them trying to come up with schemes that will either amuse them or make them some money. The kids often congregate in one area, an area that allows the viewers to observe a cross-section of the people around them. Drina (Sylvia Sidney) is a lovely, but poor, young woman, and an older sister of one of the kids. Dave (Joel McCrea) is an architect currently doing some painting work while unable to remain employed in his preferred role. There are other characters around, including a spoilt young boy, his rich parents, and a police officer who might yet arrest one of the Dead End Kids. And there's 'Baby Face' Martin (Humphrey Bogart), a notorious gangster who is paying a return visit to the neighbourhood that he grew up in. Martin hopes to visit an old flame and his mother, but he may not get the welcome from either of them that he is looking for.

Your enjoyment of Dead End is going to rely on two things. First, how much do you like the screen presence of Humphrey Bogart. Second, how much do you like the screen presence of the Dead End Kids. I REALLY like Bogart. He's one of those actors who has been in many of the movies that you can see on any "classic films you must watch" list, which is all well and good, but the more variety of movies that you see him in, the better he gets. There's a reason for him becoming an icon. As for the Dead End Kids, I still like them enough to be able to enjoy a movie that gives them plenty of screentime. They're very broad caricatures, and there's not much to differentiate any one from any other (so it's best just to treat them as a collective at all times), but they're amusing enough. They also, in this instance, really exemplify the impact that maintains, and contributes to, the big gap between the haves and the have-nots.

Sidney and McCrea do good work here, managing to posit themselves as potential lead characters without overdoing things in an attempt to outshine Bogart or the kids. The script treats them well, they are the characters who are trying the hardest not to let their circumstances change them for the worse, but their situation runs parallel to the diversions caused by the kids and the potential threat posed by Bogart's character. It's worth mentioning Billy Halop as Tommy, one of the gang who gets himself in more trouble than the others. The fact that Tommy is the younger brother of Drina complicates things further, especially when the police start to pursue him more seriously, and Halop is enjoyably frantic and frustrated for most of the third act.

Despite some of the talent involved, this is still a film that is far from unmissable. The light tone, due to the focus on the Dead End Kids, holds it back somewhat. Even the important points being made are almost buried under the constant bickering and hijinks (although some of the hijinks are a bit too serious to be labelled as just hijinks). This is of interest to film fans who enjoy fare from the '30s and '40s, and I enjoyed it while it was on, but everyone else could easily give it a miss. You won't feel as if you're missing out on anything. 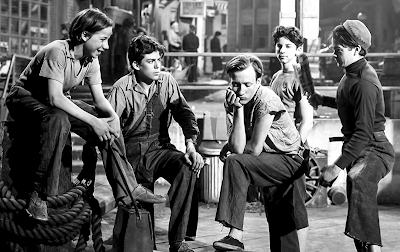