The feature directorial debut of Ben Affleck, Gone Baby Gone allows the actor to come out swinging. Hard. Having also worked on the screenplay with Aaron Stockard, adapting the Dennis Lehane novel, Affleck has a controlling and steady hand all over this. He may have helped himself by casting his younger brother, Casey Affleck, in the lead role, with the two apparently bringing out the best in one another.

The plot revolves around the disappearance of a 4-year-old girl, Amanda McCready. The police, headed up by Jack Doyle (Morgan Freeman), want a positive outcome, but the odds of that happening diminish with every passing day. Desperate relatives hire Patrick Kenzie (Casey Affleck), a street-smart private investigator who may be able to get information from people who wouldn't talk to the police. Kenzie works with his girlfriend, Angie Gennaro (Michelle Monaghan), and the two of them quickly seem to make a bit more progress than the police.

Almost as much a study of a place as it is a murky crime drama chock full of memorable characters, Gone Baby Gone sometimes comes perilously close to feeling like some kind of parody. Most of the cast have worked hard on their accents, but they're also people we don't normally hear speaking with that particular Boston drawl. The strength of the material helps them overcome that though, as well as their commitment to their roles (most notable in the strong atypical turn from Amy Ryan, playing the mother of the missing girl).

Although arguably not as cinematically ambitious as his next feature, The Town, this benefits from a script that mixes neo-noir cool with a load of unsavoury characters. The twists and turns are gripping, but none of them feel completely unbelievable. And the third act is one superb moment after another.

There isn't really anyone here I could single out as letting down the rest of the cast, with fairly flawless performances (wavering accents aside) across the board. Affleck is perfect for the lead role, always being underestimated due to his youthful appearance, but always sizing up every bad situation as quickly as possible to find the best way out of it. Monaghan does fine, playing a vital character who almost provides another entire facet to Affleck's character. As well as Ryan giving a great performance, sterling support is provided by the likes of Morgan Freeman (as good as ever), Titus Welliver (another one here with one of his very best film roles), and Ed Harris (on top form). Michael Kenneth Williams has a couple of decent little moments and Edi Gathegi makes a strong impression as a criminal who may or may not know the whereabouts of the missing child.

Grounded with a very real blanket level of pain and trauma, and positing one hell of a moral quandary in the third act, Gone Baby Gone is a mature and thought-provoking work that also manages to be consistently captivating. 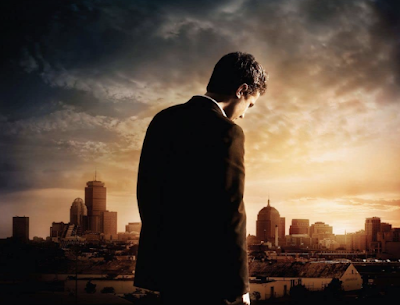