Directed by Arne Mattsson, a Swedish director that I seem to be unfamiliar with (and I don't want to write that in a way that implies I am otherwise teeming with knowledge about so many other movies, and talent, to have ever come from Sweden), A Guest Is Coming is a short, neat, and quite unspectacular, little mystery. What makes it more interesting is the noir style overlaying the material. This is a film that helps to keep the mystery dark and impenetrable by keeping most of its shots that way, with characters and grisly deeds often hidden in the shadows.

The plot is very simple. A number of people are gathered together in an old mansion, with a writer named George Essman (Sture Lagerwall) among them. Everyone is soon distressed when they find that one of their number is dead. It could have been an accident, but that looks unlikely. In fact, the evidence quickly points towards young Ragnar (Karl-Arne Holmsten). Siv (Anita Björk) hopes that it isn't him.

Written by Stieg Trenter, the script is arguably the weakest thing here. There are very few exchanges that feel fun or particularly witty, very few moments that feel as if they give characters more than one main trait to completely identify them, and even the final resolution falls flat. Considering the plotting, Mattsson cannot do too much to elevate the material, but he tries his best to keep everything looking nice and stylish.

Lagerwall is a decent amateur detective lead, smart and observant enough while onscreen, yet also able to fade into the background whenever the focus shifts to others. Holmsten and Björk are both fine, Gerd Hagman is enjoyable (playing a young woman named Christina), and everyone else does a good job of being a potential victim or prime suspect.

A Guest Is Coming is easy entertainment, but it never comes close to being anything more than that. It's a time-waster, a schedule-filler, even if it does have a different feel when compared to many of the British and American mystery thrillers from this era. If made in the modern era, it would be filmed with some gimmicky "noir" filter, which is all Mattsson seems to think it needs to help it stand out from more standard, and staid, tales of detection. And the thing is . . . Mattsson isn't entirely wrong. It's not always a good thing to receive a load of style over substance, but I'd rather watch that than a film without either of those things going for it.

It's a good thing that the look and feel of the film can help it become at least average. It's not so good that average is the best it can manage to be. 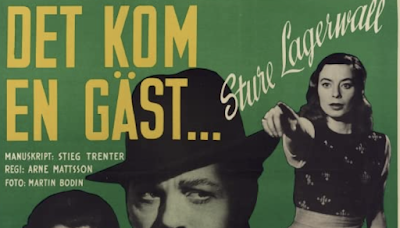