Having not heard of director Stephanie Rothman before, I didn't know what to expect at all from The Velvet Vampire, a film that sits almost exactly at the mid-point of a filmography that includes titles such as Blood Bath, It's A Bikini World, Group Marriage, and The Working Girls. Having co-written this film with Maurice Jules and, regular collaborator, Charles S. Swartz, Rothman obviously had something in mind that would carefully navigate territory between art and exploitation, an erotic vampire tale that also takes time to show that the seductions are just part of the facade of a lonely and pained soul, but the end result is a bit of a mess. And some sequences are just plain boring.

Celeste Yarnall is Diane LeFanu, a young woman who lives in an isolated house in the middle of nowhere. It isn’t a castle atop a mountain, nor a cabin in the woods, it’s just situated in a desert-like area, a good distance away from any nosey neighbours. When Susan (Sherry E. DeBoer) and Lee (Michael Blodgett) visit her, it doesn’t take long for her to start displaying signs that she may be wanting to suck their blood.

Now fifty years old, and not looking as if it is about to get a pristine restoration any time soon, The Velvet Vampire is a rough, ugly, film that tries to make up for that aspect with moments that present the characters and/or nudity in more aesthetically-pleasing shots. It also tries to put some fresh spins on vampire lore, although none of that really clicks into place until the very last scene of the film.

Yarnall is certainly attractive enough in her role, and acts enjoyably confident and uninhibited in her own skin. It’s easy to see how she could lure and keep people by her side. DeBoer and Blodgett have less presence, and I wouldn’t single either one out as a great thespian, but both are game when it comes to the flesh-baring requirements of their roles. Other people flesh out the cast, but nobody makes a strong impression (certainly not for the right reasons).

While this is a bizarre piece of work, and not one I'd ever recommend anyone putting high on their list of prioritised viewings, I'm happy that it hasn't been completely lost. Although hampered by her limited resources, Rothman does her best to make an impact with the strength of her ideas and vision. There are times when that comes into view, a hazy abstract that clarifies for just a moment, like a mirage offering a gorgeous watering hole to a parched wanderer, but it's gone just as quickly. The more I think about it, however, the more I admire it. It's an American film from the early 1970s that attempts to deliver something more in line with the European vampire movies of that time, and the very end of the film gets things just right with an explanation that basically explains things well while also teasing an entertaining final turn towards darkness.

If you can overlook how dated and technically crude it is, there are still enough individual moments here to just about make this worth 80 minutes of your time. 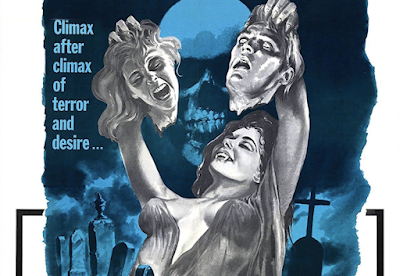