Written and directed by Carl Franklin, adapting a novel by Walter Mosley, Devil In A Blue Dress is a confident and traditional neo-noir that gains extra cool points, and kudos, by providing a great lead role for Denzel Washington.

Washington is "Easy" Rawlins, a man who has just lost his job and needs some money coming in so that he can keep up the mortgage payments on his home. He ends up taking on a job from Dewitt Albright (Tom Sizemore) which involves locating a young woman named Daphne Monet (Jennifer Beals). It's not long until people start dying, Rawlins finds himself as a prime suspect, and the people trying to locate Monet may not have been honest about their reason for wanting to do so.

Despite being a film from the mid-90s, Franklin isn't interested in delivering anything other than a bloody solid noir. The script, plotting, and pacing are all unfussy and unrushed, taking time to set up the pieces that will all be turned around slightly to fall into place in time for the finale. There’s nice attention to period detail throughout, crafting enough of the late ‘40s Los Angeles world to make it a very real environment in which the action unfolds, and Franklin keeps track of every plot strand and ties everything together nicely by the very end.

The biggest problem that the film has, and that will put some people off, is just how happily traditional it is. You get some flashes of violence, you get one or two sexy moments, and you get plot points that will give even the most casual noir viewer a sense of deja vu. Thankfully, the execution is strong enough to compensate for the lack of any new ground being broken. And any film working within the noir framework is rarely looking to break new ground.

Washington is a great choice to star here, bringing his not inconsiderate amount of charm and cool to the role. He’s so good that you end up immediately hoping there are other noirs that have made use of him (suggestions welcome, I have currently drawn a blank). Sizemore is excellent as the employer who may not be as nice as he initially seems. Beals isn’t the best choice for her role, considering how vital she is at the heart of the events, but she does okay. Mel Winkler does great work in a supporting role, and you have fun little roles for Don Cheadle (sorely underused), Maury Chaykin, and Terry Kinney. There’s rarely a mis-step in the whole cast, and it’s a shame that Franklin actually doesn’t indulge himself with some more scenes just showcasing some of the smaller roles.

It’s not going to change your world, and is unlikely to become an absolute favourite, but Devil In A Blue Dress is quality entertainment that benefits from all involved taking care with the material and delivering low-key excellence across the board. 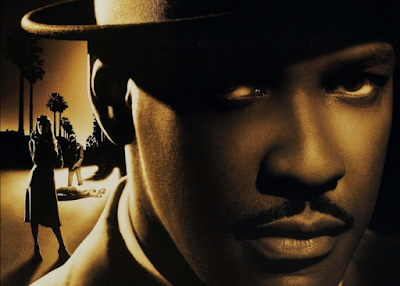