The only feature script, to date, written by James V. Simpson, Armored is an enjoyable tense and entertaining little crime thriller that I believe still remains an underseen gem (although it got some decent notices when it was first released).

Columbus Short plays Ty Hackett, one of a number of people working for an armored-truck company. His co-workers include Mike (Matt Dillon), Baines (Laurence Fishburne), Quinn (Jean Reno), Palmer (Amaury Nolasco), and Dobbs (Skeet Ulrich). All of them seem decent enough, but they have a plan to make them all rich men. Stage a fake robbery and keep the money for themselves. Ty doesn’t want any part of it, but his growing financial problems and a promise that nobody will be hurt wins him over. So it’s all set. And then somebody gets hurt, which immediately pits Ty against all of his former colleagues. As an ex-soldier, he may be able to get the upper hand for a while, but the odds are stacked against him.

What you have here is a fun, tight, script, with a great concept at the heart of it, elevated by a superb ensemble cast full of people all given moments to shine. Short may be one of the lesser-known names here, but he's a very capable, and likeable, lead. Dillon has been a low-key absolute great for many years, and is especially good as the one who masterminds this plan. He's the one trying to keep his head while others are growing increasingly angry, or worried, and frustrated, and things are made even more tense by the way he can go back to being nice and calm, leaving viewers wondering how much of it is genuine and how much of it is just to get our hero in a position where he can be dealt with. Fishburne is not to be messed with, and has a lot of fun in his role, while Ulrich gets his best role in a long time. Reno and Nolasco may be a bit underused, but they're still a vital part of the group dynamic. There's also an enjoyable little turn from Fred Ward, Milo Ventimiglia plays a cop who ends up in the wrong place at the wrong time, and Andre Jamal Kinney is the younger brother of Short's character, a decent kid with some problems applying himself at school, and he's another factor motivating our lead to finally go along with the initial plan.

Director Nimród Antal does a fantastic job of making the most of the script, using very few locations without things ever feeling far too limited or low-budget. Everything looks great, the tight geography is clearly laid out, and each step of the journey is logical, with characters all dealing with the spiralling awfulness in expectedly different ways. One moment stands out for the wrong reasons (involving Nolasco's character), but even that doesn't feel outwith the realms of possibility.

It's the kind of film that you would have loved to find on your local video store shelves many years ago, one that you immediately love even while seeing why it wouldn't have had, or made any major impact with, a cinema release. Technically sound, with fine cinematography by Andrzej Sekula and a decent score by John Murphy also adding to the overall quality of the final product, the fact that it comes in at just under the 90-minute mark is also a major bonus. Antal knows the best way to handle the material, and he's done that with pretty much every title in his filmography (which is well worth checking out). 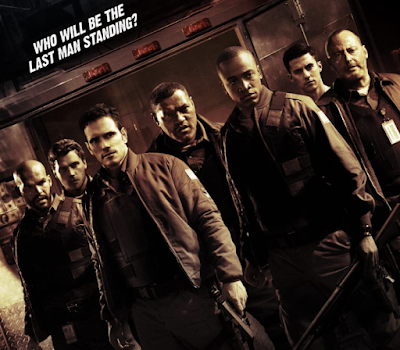