There are many contenders for the title of "best Coen brothers film ever", depending on your own personal taste and what day of the week it is. But I'd worry about someone who didn't at least consider Miller's Crossing up there in the uppermost tier.

Gabriel Byrne plays Tom Reagan, the right hand man to a crime boss named Leo (Albert Finney). Tom does a lot of Leo's dirty work, but he always knows the reason for doing things. That starts to change when Leo upsets Johnny Caspar (Jon Polito). He's not willing to hand over a snivelling little low-life named Bernie Bernbaum (John Turturro), possibly because he's in lover with Bernie's sister, Verna (Marcia Gay Harden). The extra complication in this mess? Tom also seems very attracted to Verna. Trouble is definitely brewing, and it may lead to Tom and Leo parting ways forever. It might even lead to the death of Tom.

A film famously paused by a bout of writer's block that led to the Coens writing Barton Fink, this is a neo-noir gangster movie that celebrates classic tropes while also filling every sequence with gloriously cinematic moments, from the memorable image of a black hat being blown by the wind through a woody area to a gunfight that uses the kind of overkill viewers will recognise from the WB classics of the '30s and '40s. The plot will also be familiar to anyone who has read some of the main works from Dashiell Hammett, or even seen some of the movies based on his work (particularly The Glass Key). And, despite the break required (or maybe because of it), this sits up there with one of the very best scripts written by the Coen brothers, expertly blending the traditional with the ear-caressingly cool. It's the best dialogue that Byrne has ever been given to deliver, and he certainly makes the most of it.

Although there are others worthy of consideration, I'd put this as the best film role that Byrne has ever had. Never unsure of himself, even when about to be handed a beating, and effortlessly cool, he even manages to look like someone punching in the face is a result he was aiming for. Finney is also excellent, absolutely convincing as a boss who no longer often needs to throw his weight around as he has others who can carry out his orders. Polito is equally convincing, a rival crime boss attempting to keep the peace, but also willing to push back harder if he is being made to look weak. As for Turturro, this may be his greatest single performance. He and Byrne are given a gift by the Coens, and they make the most of it. Harden is an enjoyable potential spanner in the works, sensual and self-preserving, and there are some intimidating henchmen portrayed well by J. E. Freeman and the inimitable Mike Starr. There's also an enjoyable small role for Steve Buscemi, although it's worth noting that every single supporting actor here feels perfectly picked for whatever role they're given, from anonymous shooters to local cops.

There's a great score by Carter Burwell accompanying the lush visuals (from Barry Sonnenfeld, who solidified his DP credentials with the Coen brothers before building his own directorial career), wonderful production design throughout, great costumes, and on and on goes the list of positives. The more I think about it, the less I can find to fault here. It is, for me, absolute perfection, and easily jostles alongside The Hudsucker Proxy as the very best feature that the Coen brothers have delivered thus far.

If you have enjoyed this, or any other, review on the blog then do consider the following ways to show your appreciation. A subscription/follow costs nothing.
It also costs nothing to like/subscribe to the YouTube channel attached to the podcast I am part of - https://www.youtube.com/channel/UCErkxBO0xds5qd_rhjFgDmA
Or you may have a couple of quid to throw at me, in Ko-fi form. "If you want me to keep my mouth shut, it's gonna cost you some dough. I figure a thousand bucks is reasonable, so I want two" - https://ko-fi.com/kevinmatthews 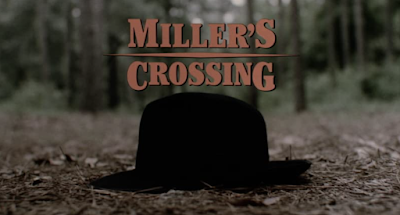