I used to love the TV show "Most Haunted". There was a time there when I was slightly addicted. I even watched one of their live events. And then one day I just stopped. There was only so much table-tipping I could stomach, only so much nonsense being spewed by Derek Acorah, and only so much padding around entirely explicable phenomena that were put forward as definite signs of the undead trying to make contact.

It turns out that Zak Bagans, who wrote, directed, and stars in this "documentary", is most famous for working on an American show that is the equivalent of "Most Haunted". I have never seen that show, "Ghost Adventures", but I now know that I definitely wouldn't ever want to watch it. Because Bagans is a mixture of all of the things that immediately start to irritate me. He has to make everything extra dramatic, and emphasises things about three times in a row to make sure you get how dramatic it really is. If any coincidence can be played up for spookiness then it is. And he wears sunglasses in doors. Yeah, not my type of guy at all. Will I also openly question the veracity of what he puts onscreen here, from the witness testimonies to his own encounters? Maybe, but I wouldn't put anything in stronger terms, mainly because Americans can be so damn litigous.

There is a plot here. Bagans ends up buying a house that was at the centre of the Ammons case, an alleged haunting that featured some very dark and disturbing events. The previous residents of the house are so scares that they generally won't even talk to Bagans, for fear of any insidious force reaching them again. So Bagans talks to everyone else he can get hold of, from police officers to a relative of the affected family, and a few more. They talk and he gets to repeat what they say, with added dramatic emphasis. And you get some weird things happening on camera, which you are free to view as real events or not.

The thing is, deep down, I no longer believe in the supernatural, ghosts or demons. I used to. And I still believe that we don't know how everything happens in the world around us, especially when it comes to our death (as we're all made up of energy), our memories, and our sensory perception being affected by both of those things. I also wouldn't stay in any allegedly haunted house for £10,000. I am just too much of a scaredy cat, and my imagination runs wild at the slightest little noise. So Demon House should have worked better for me than it did. I still expected to roll my eyes, but was looking forward to a few small chills and thrills throughout. I got none.

Most of that is the fault of Bagans, who seems so obviously desperate to put himself at the centre of a hot story that he will buy a notorious house, get people around him agitated by his methods, and then posit himself as the one person striving to be strong enough to face the dark forces swirling all around us. I hope I never see him in any feature again. And I'm amazed the house didn't growl "get out" at him, a la Amityville. I know I would have. 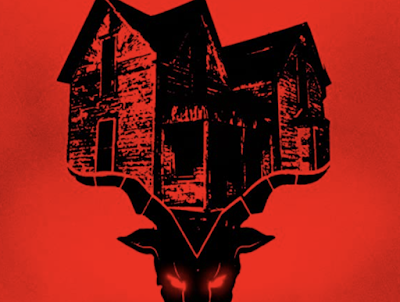