Take a little bit of Picnic At Hanging Rock, add a smattering of The Crucible, and then underpin with the turbulent emotions of a young girl struggling to maintain any kind of relationship with her single mother and you have The Falling, an intriguing drama that benefits from a superb cast, all giving great performances, and a script that keeps diving deeper into darkness as things build towards the end of a particular journey for the lead character.

Maisie Williams is Lydia Lamont, a young girl who is best friends with Abbie Mortimer (Florence Pugh). It comes to light that Abbie is pregnant, which creates a strain between the two of them. A tragedy soon occurs, which then leads to an outbreak of fainting spells throughout their school. Is there something real behind these incidents, or is Lydia somehow influencing all of the other girls around her?

Written and directed by Carol Morley, this is very much a film that keeps digging further and further into a pit of grime, culminating in a third-act that isn't afraid to truly shock viewers, but not in a way that feels like it is being gratuitous or exploitative. Along with the fainting spells, Lydia is falling further further into a spiral of poor mental health, spurred on by her thoughts about her own life and her mother, all to the fore while she has less to distract her from her home situation.

Initially showing a typical clear divide between the girls and their teachers, lines start to blur while the latter characters start to struggle to maintain their composure, either due to the thoughts they start to have about their own lives or the growing show of strength required to try bringing the girls back in line.

Williams is very good in her role, giving a performance full of twitches and meanness that isn't reduced to JUST the twitches and meanness. Pugh has a lot less screentime, but brings her usual charisma to help her character cast a large shadow over all of the proceedings. Maxine Peake is Eileen Lamont, Lydia's mother, and gives an excellent and nervy turn, and Joe Cole plays Kenneth, Lydia's brother, a young man who makes some absolutely horrible decisions. Greta Scacchi and Monica Dolan are the two main teachers, and both excellent in their roles, and you get decent roles for Anna Burnett, Hannah Rose Caton, Morfydd Clark, and others.

Deceptive, in terms of how far away the feeling of the ending is from the feeling of the start, The Falling is an excellent British drama that manages to feel both traditionally grounded and psychologically complex, probing some very unexpected areas. Recommended. 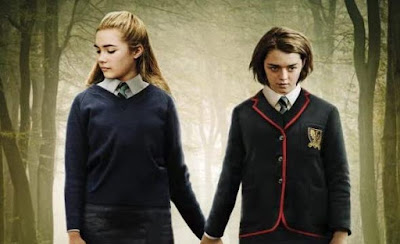