Although released in 2020, You Should Have Left feels very much like a film that could have easily been a 2000 option. In fact, it has more than a few similarities with a major 2000 hit, which I won't mention here, because that would spoil things somewhat. It's not a bad film, I actually really enjoyed it, but it is quite a safe and predictable one, ultimately.

Kevin Bacon and Amanda Seyfried are the couple who move into a strange holiday home in Wales. It's just them and their daughter, Ella (Avery Essex). And whatever else resides in the house. Because the house definitely has something in there, be it a supernatural presence or just a constant disregard for the everyday rules of physics. Doors lead to other doors, leading to other doors. The house is bigger on the inside than it is on the outside (not in a fun TARDIS way). And time moves in mysterious ways once you start wandering through the various corridors and rooms. It's not entirely unironic that Mr Six Degrees Of Kevin Bacon stars in a film set in a house which keeps changing by many degrees.

Written and directed by David Koepp, based on the novel by Daniel Kehlmann, what you end up with is a very traditional tale of the supernatural that feels a bit fresh and unique because of the very modern home used as the main setting. Well, it feels that way until you get to the grand finale, which actually provides an explanation that you almost refuse to believe, because it's the most obvious of all possible explanations (in terms of genre plotting, not in terms of everyday life). That doesn't detract from how effective the rest of the film is, and doesn't in itself ruin the whole thing. It's just a shame that there wasn't a more interesting and unique way to bring everything to a close in the third act.

Bacon and Seyfried are both excellent in their roles, despite the latter being about thirty years younger than the former (something I thought would be used within the actual plot, but really isn't . . . so I guess that is still just mainstream movies being mainstream movies, right?), but it's hard to truly buy them as a loving, married couple. Viewers see them with some  strain already on their relationship, and it takes time to tease out the details. Unfortunately, the damage is already done by then. It's almost impossible to think of how they got together, how they connected, and how they have stayed together for as long as they have. Essex is a very good young actress, managing to show a balance between being afraid and having the kind of open mind that can allow children to accept more weirdness than adults would put up with.

This review seems more critical than I intended. The more I thought about the movie, the more I could think of that was wrong. But, and this is important, I didn't really think of all of these flaws while the film was playing. I enjoyed the strangeness, enjoyed the spookiness, even enjoyed predicting some of the third act beats. You Should Have Left is far from perfect, and there are many ways in which it could have been improved, but it's an enjoyable attempt to do something familiar in a way that feels slightly new.

Buy me "a coffee" here, if you like any of my reviews, or even if you hate them and want me to get over-caffeinated - https://ko-fi.com/kevinmatthews 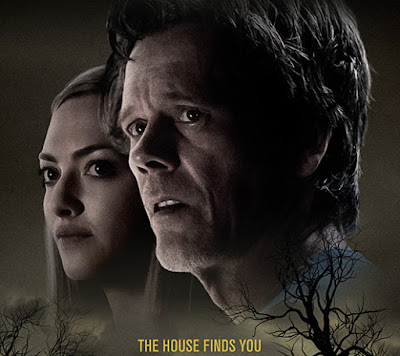