Norman (Jordan Waller) and Annabelle (Kathryn Wilder) have just laid their mother to rest when they stumble upon a wild secret. She wasn't really their mother. Their mother seems to be a woman named Mary (Kerry Armstrong), who lives in the small Australian town of Two Heads Creek. Leaving the family butcher shop behind (well, Norman finally does that, Annabelle left it behind a long time ago), the pair head down under for a trip that will encompass family matters, a ridiculously upbeat local guide named Apple (Helen Dallimore), and some unpleasant-looking, but tasty, stew.

Directed by Jesse O'Brien, and written by Waller, two people who only have a handful of respective movie credits to their names, Two Heads Creek is sometimes an attempt at the kind of broad splatter horror comedies that we have seen before. Strangely, it also tries to posit itself as a film with some timely commentary on immigration and the constant mistreatment of those viewed as outsiders. I refer to this as strange because it just doesn’t work, especially in the early scenes that show Norman being given abuse by some teens because he’s not a Brit, apparently.

Having given himself a decent lead role, Waller fails to put the rest of his energy into creating a fully-realised environment for both the horror and comedy to better develop and reverberate throughout the slim plot. It’s a shame, especially as O’Brien isn’t able to add anything to the material with his notably competent, but unremarkable, direction.

Waller does better with his acting, making Norman a very likeable and sweet main presence, and he works well alongside Wilder, who is given a character less likely to  think before she gives people her honest opinion of any situation. Dallimore is an obvious highlight, whether being chirpy and cheery or being potentially menacing, and both Kevin Harrington and Stephen Hunter do good work as a couple of the local menfolk, very different from one another in demeanour, but equally dangerous when things take a turn for the culinary. Madelaine Nunn is another highlight, playing Daisy (a resident of Two Heads Creek who takes a liking to Norman), and Gary Sweet is quietly amusing for the way he plays his role. Armstrong, as the missing mother, is okay, but there's no REAL motivation given for the way in which she gets the ball rolling with the main plot.

This seemed to go down well recently at a few festival events, and it's easy to see it being more enjoyable with the right crowd, but I was just disappointed by most of it. Never funny enough, never gory enough, never wild enough, it's a tame film that seems to think it is being bloody and crazy. Cinematically, this is the equivalent of that office "japester" who puts a dollop of tomato sauce on a tampon and turns up to the work Halloween party to tell everyone he turned up in period costume. Know what I mean? It's mildly amusing at first, but gets tiresome when he tells the twentieth person, and nobody thinks he's as clever or funny as he himself does.

That's a BIT harsh on this film, and it's not quite as bad as that, but it's definitely (sadly) not nearly as good as those involved think it is. 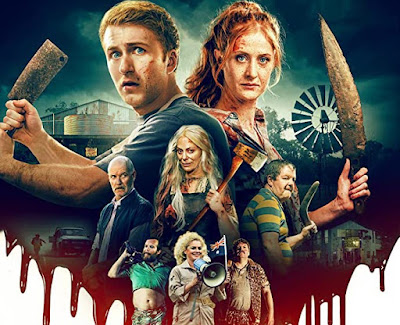